Battle born when the daylight comes.

About “Hustle Up Starlings”

“Hustle Up Starlings” is Ryan’s heart-on-the-sleeve follow through with a collection of silvery anthems that enunciate Ryan’s reignited love of language, noise and cinema. Produced by Brian Fallon from The Gaslight Anthem, Starlings shimmers with an immediate and captivating focus. The 10-song set clocks in at 40 minutes with no prevarication or bluster, just a celebratory noise alight with strong and beautiful melodies, guitars, drums, some piano and a gang of hearts fueled by the history of music they love and poetry.

“Hustle Up Starlings is not only Ryan’s best work ever, but it’s likely in contention for album of the year.”

The goal was to create an entire story of the record that was not only present within the record, but throughout the entire lifespan of the release. Ryan really pays attention to all aspects of the story (musically and visually). This makes it easier to help promote the longevity of the release. Many people stop when the packaging is finished, and never dive into full campaigns of storytelling. To be able to create a longer visual narrative was a blast. Over time we’ve collaborated on all the other pieces of the release that live past the packaging (see the design components below). It was an honor to be a part of “Starlings” and working with Ryan is a blessing that I will never take for granted. Please give it a listen, and hopefully we can cross paths at one of his shows.

“Joe’s first love is community. His second love is story. His third love is building a community with a story. He knows the power of words and images and how to get them to tell a story. Joe is hands down one of my favorite creative partners. He never ceases to visually nail whatever I throw at him in that broken language of the design illiterate. Somehow he discerns and distills it, then turns it into something that surpasses my wildest hopes. I highly recommend hiring Joe to help you tell your story.”

The cover photo was shot by an amazing photographer named Jack Spencer. The shot is titled “4th of July – Sheridan, Wyoming.” Ryan and I are fans of his work and knew this shot was the start of our story: a cinematic tale of the beauty before the breakdown. For the packaging, my goal was to portray a film noir vibe.

“Hustle Up Starlings” is independently released, but we had Blue Rose Records in Germany press a very limited run of vinyl records. The jacket and insert are printed with full color. The labels were printed in black and white at the request of Blue Rose. 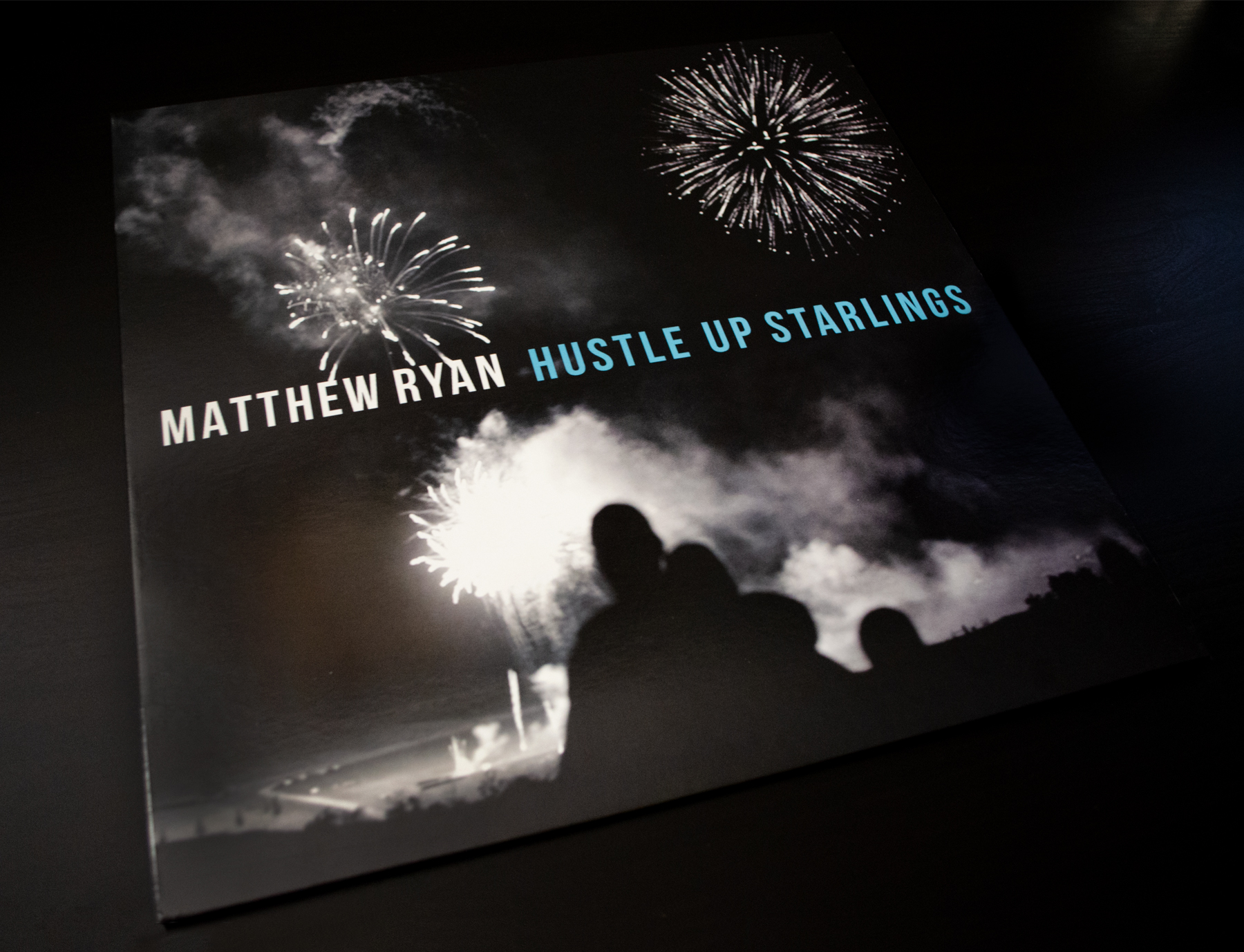 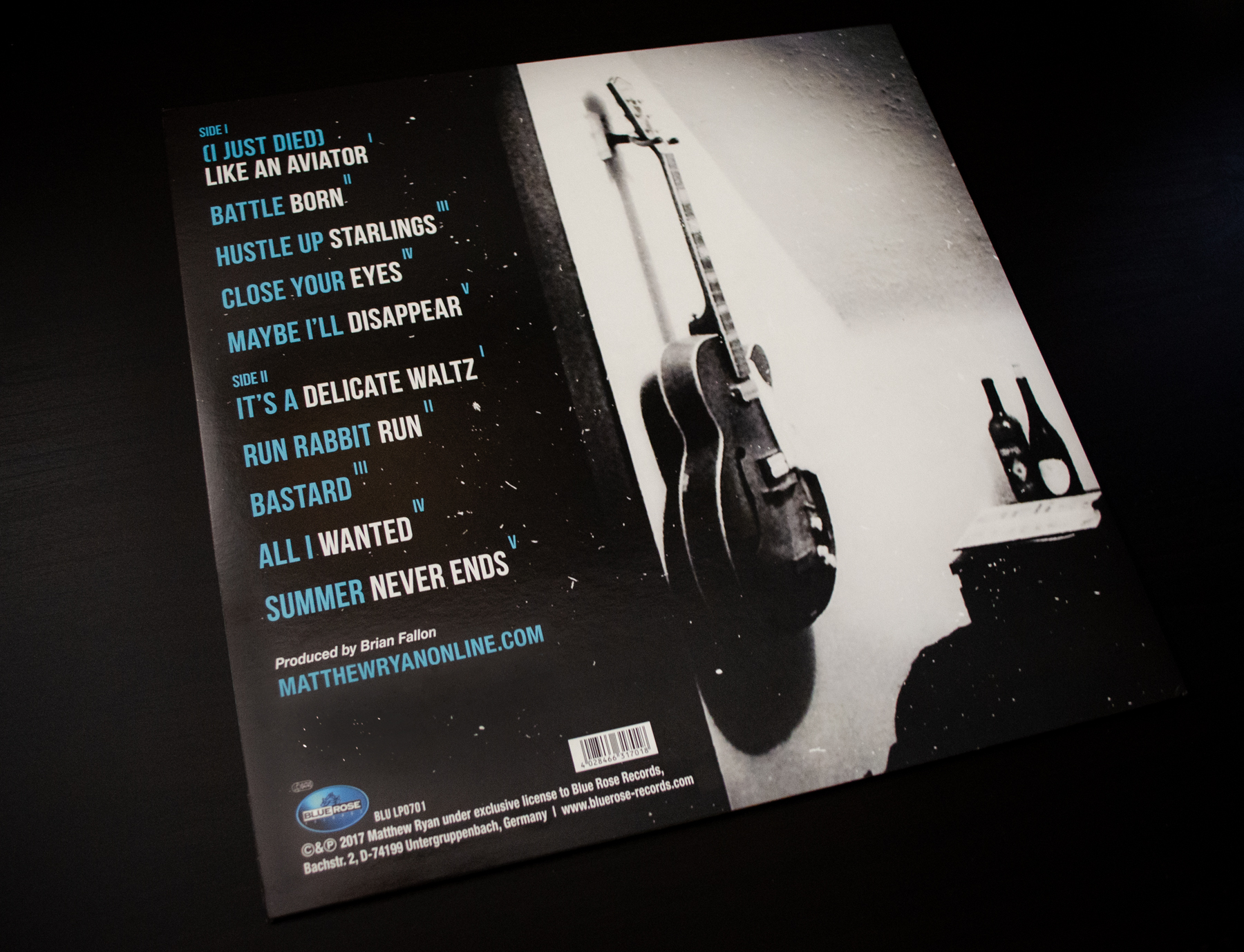 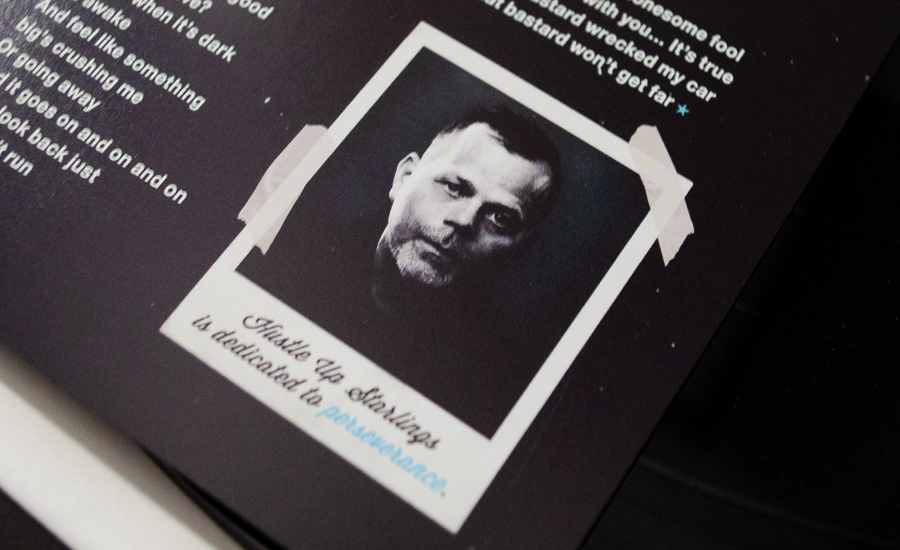 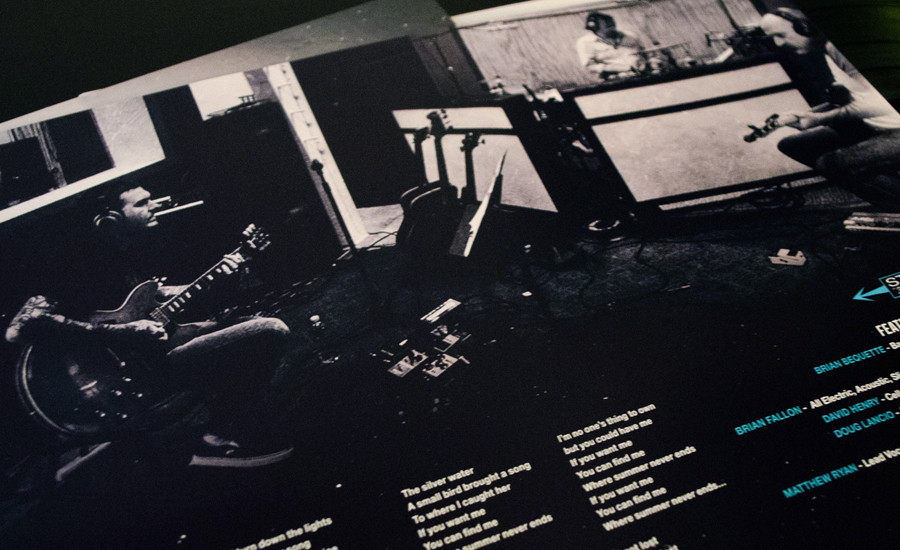 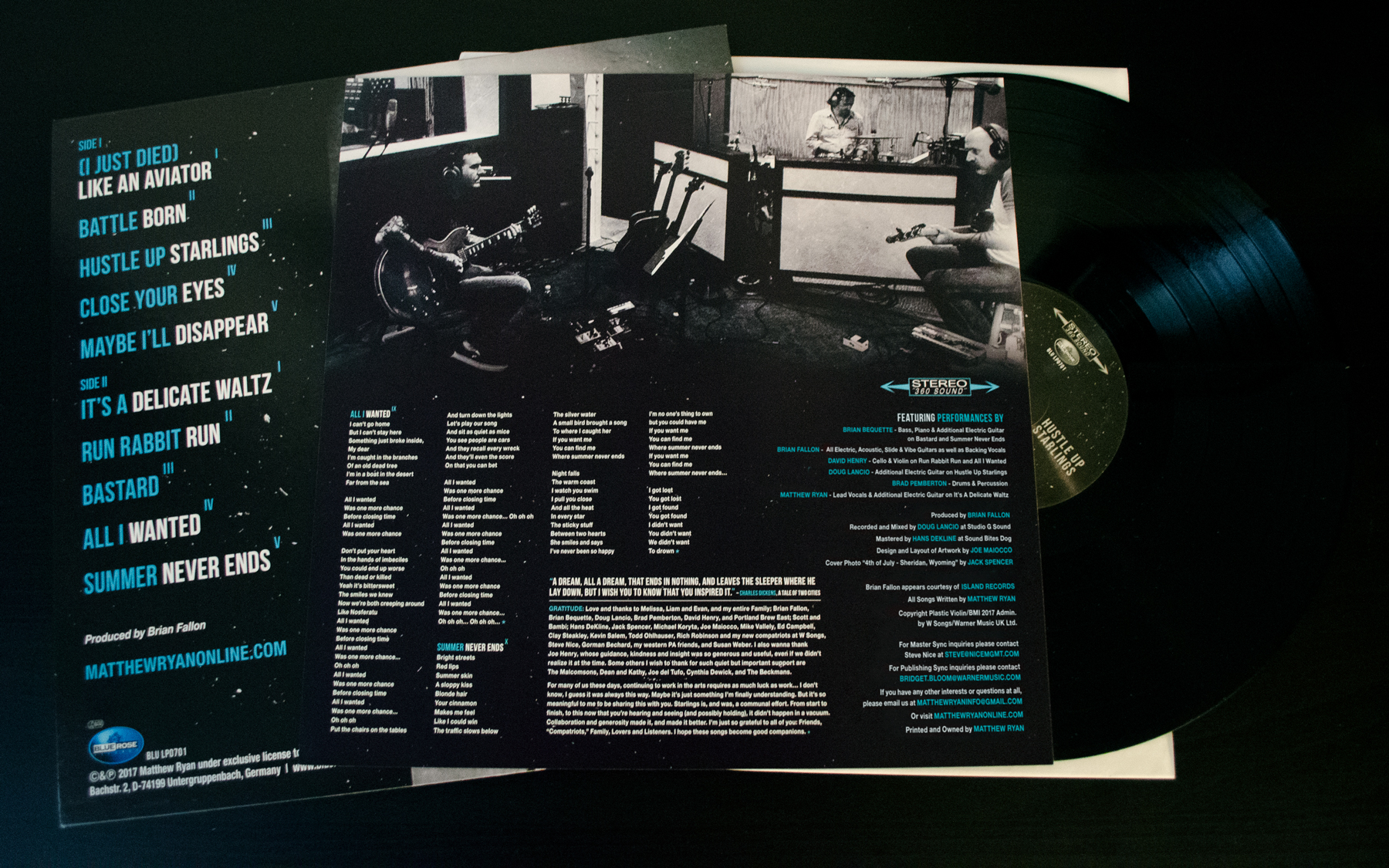 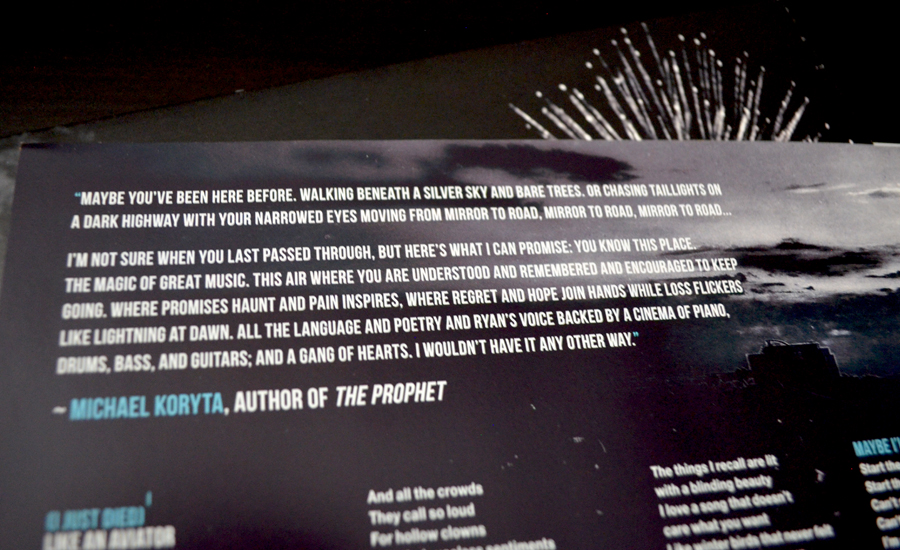 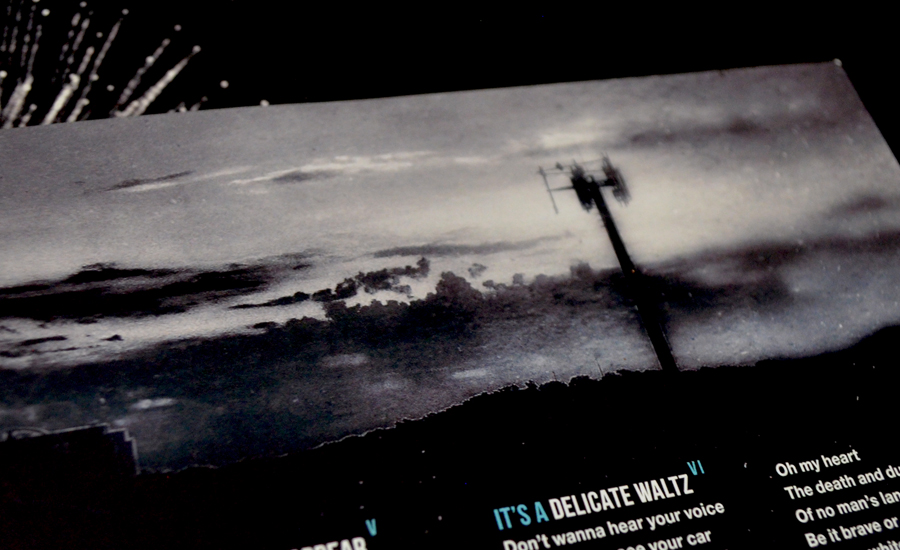 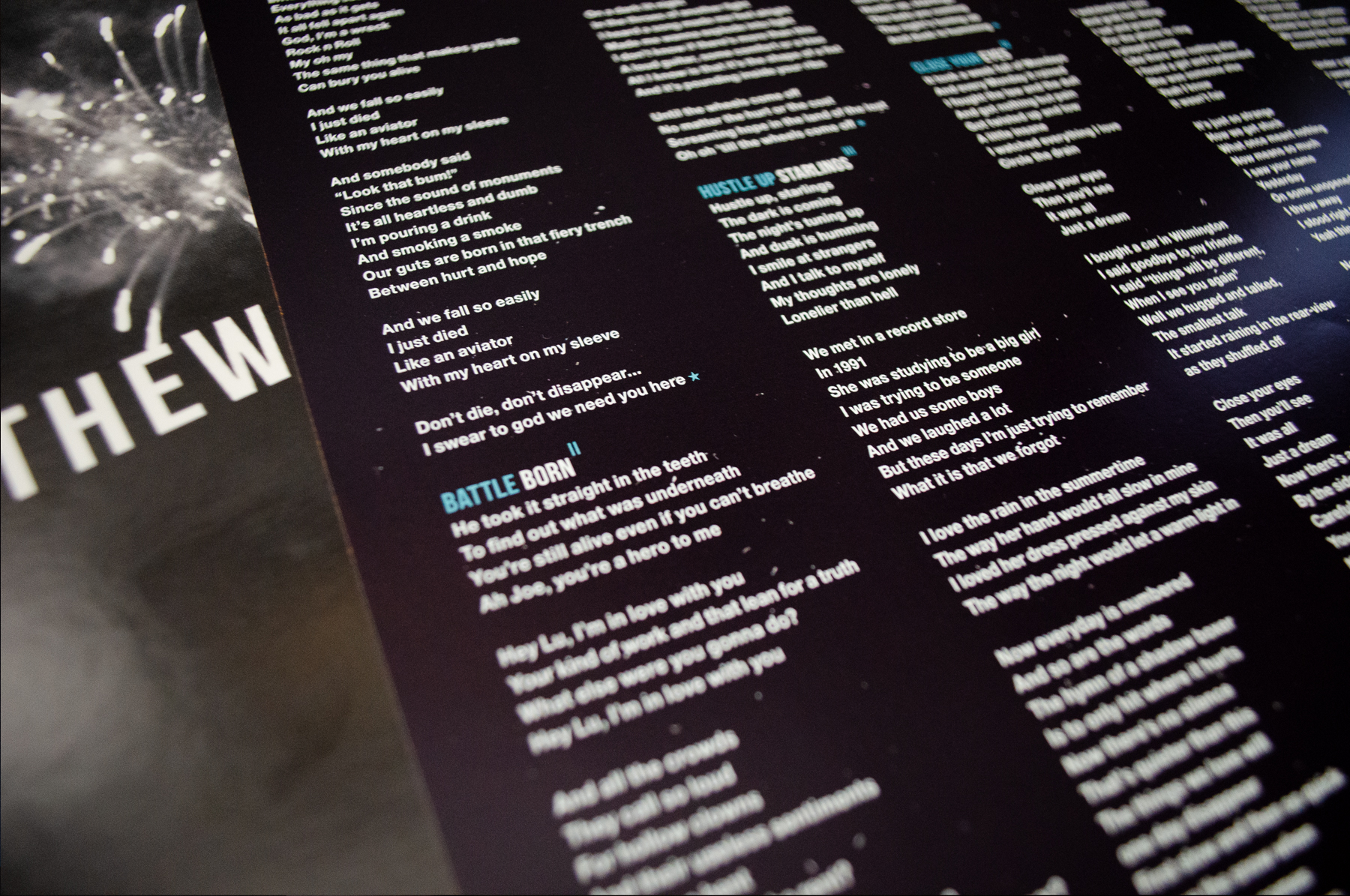 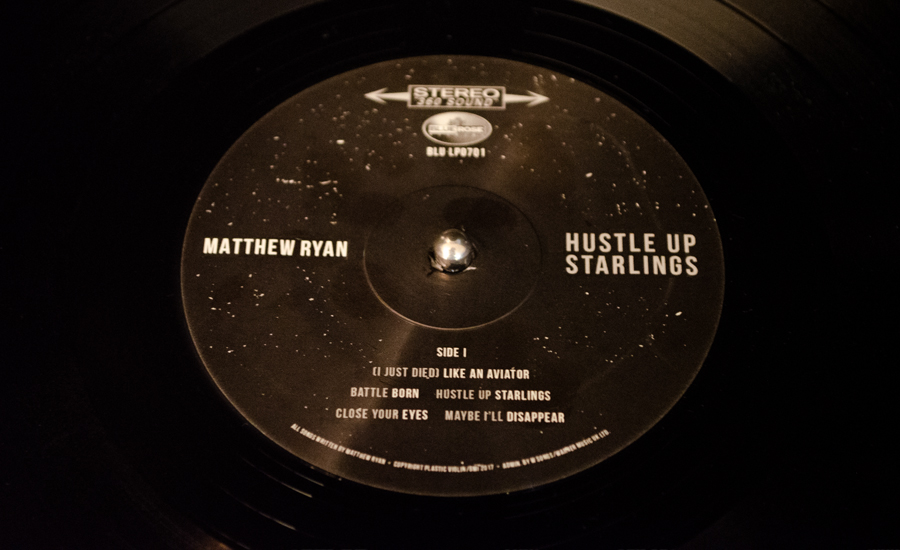 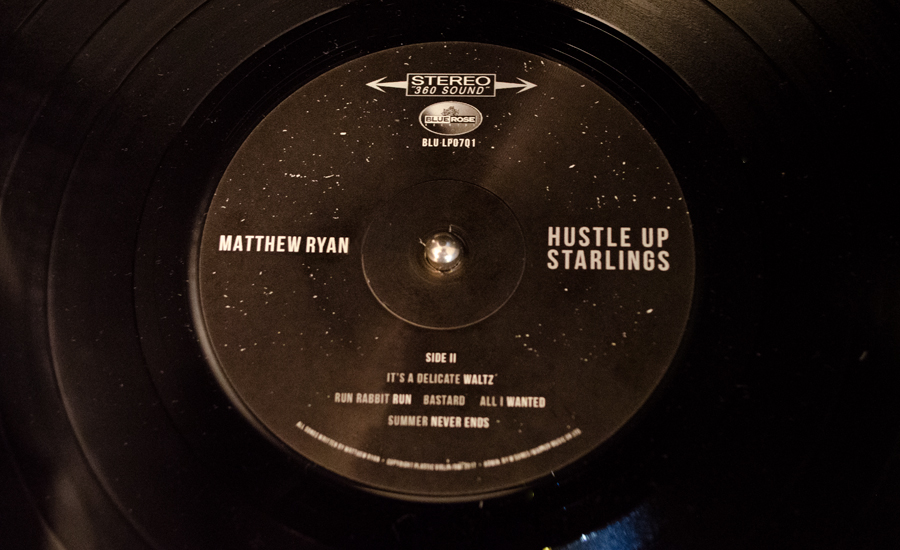 The CD packaging consists of the standard jewel casing with an eight-page booklet. Michael Koryta (American author of contemporary crime and supernatural fiction novels and New York Times best-seller) provided the introduction for the booklet and vinyl insert. There is additional photography by Scott Simontacchi and a dear friend who doesn’t have a website (Frankie Fingers). Finally, as a little Easter egg, I snuck in a flock of Starlings in the spine of the jewel casing. 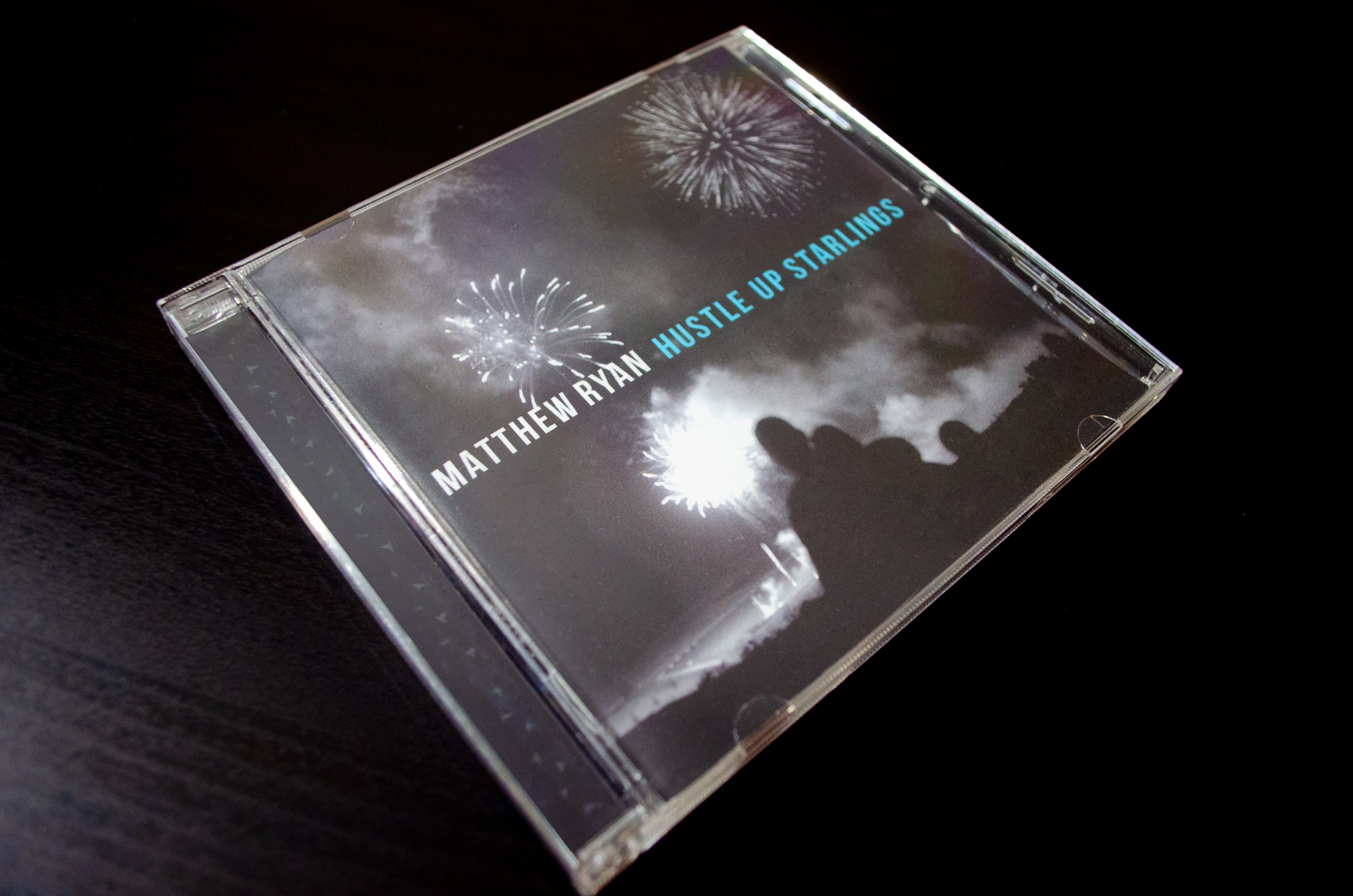 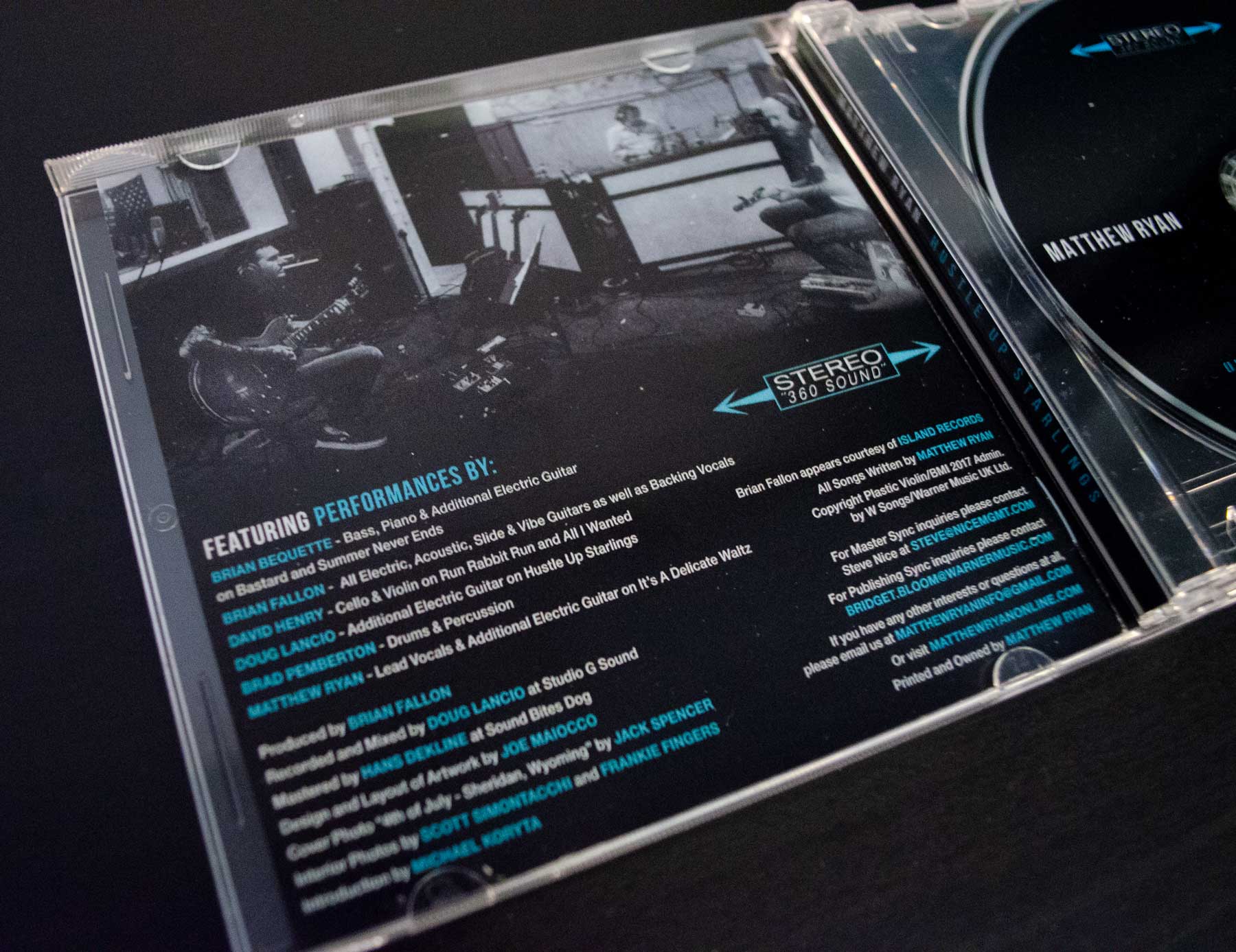 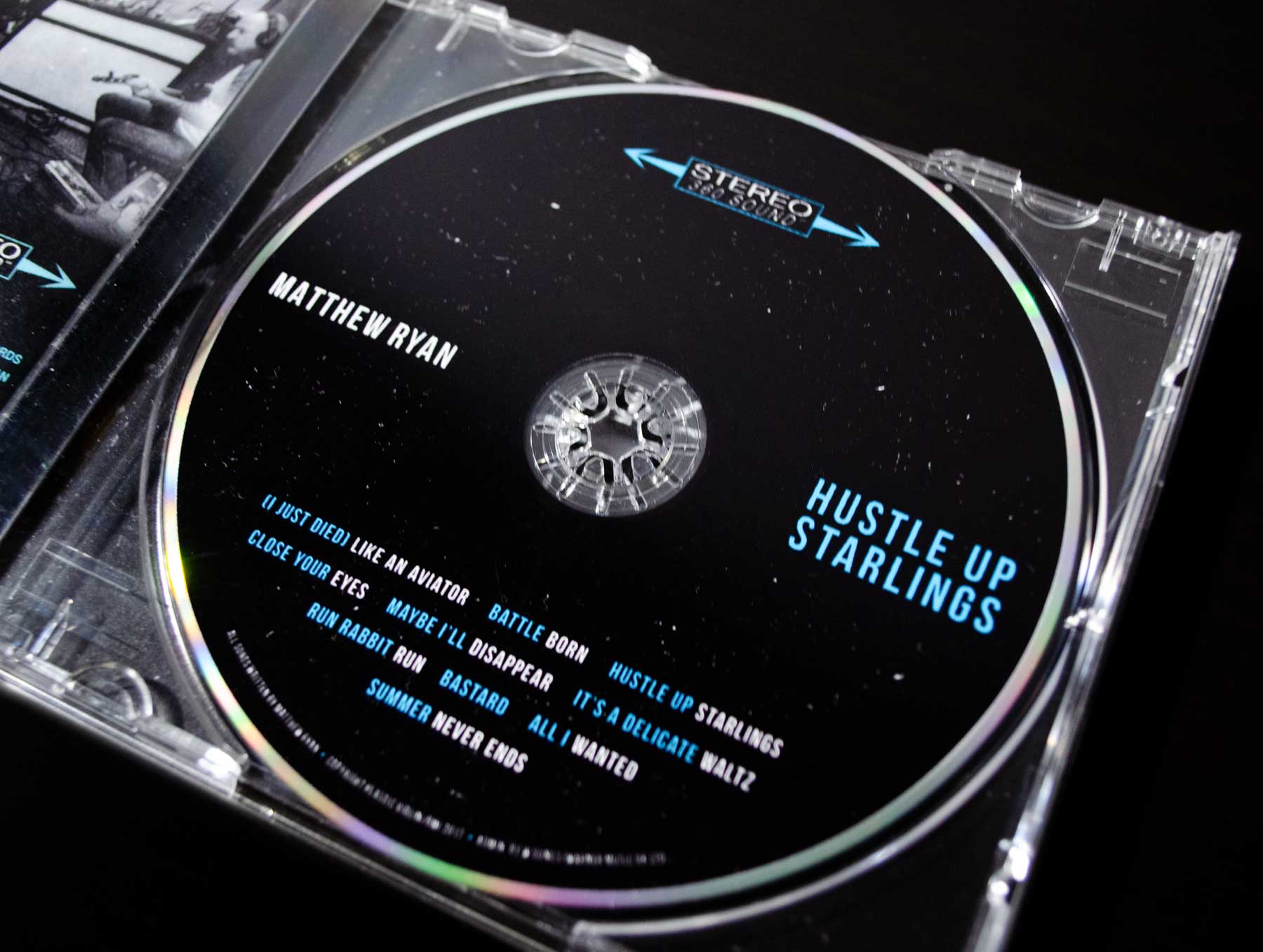 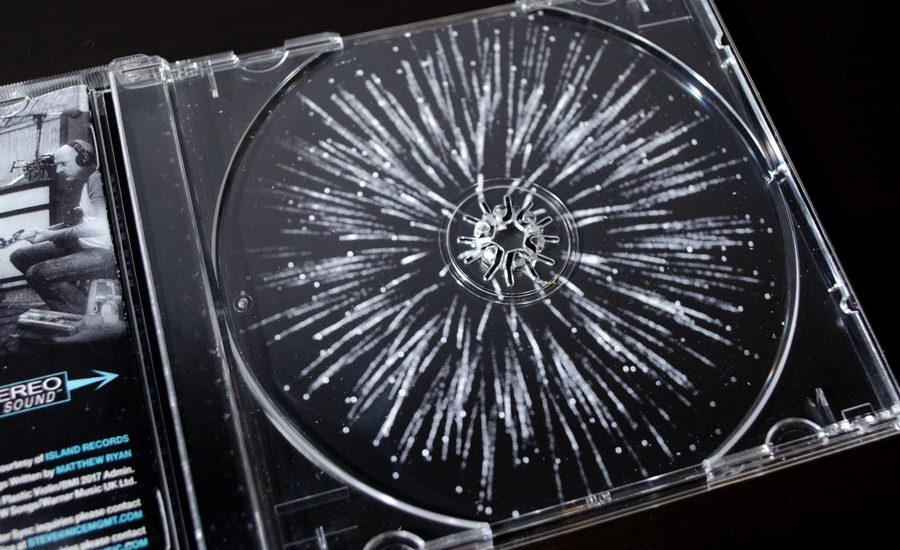 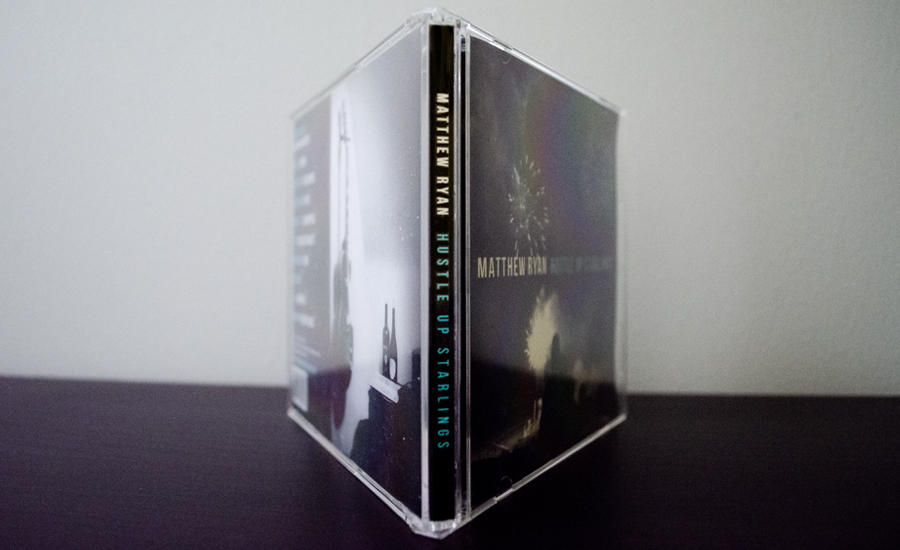 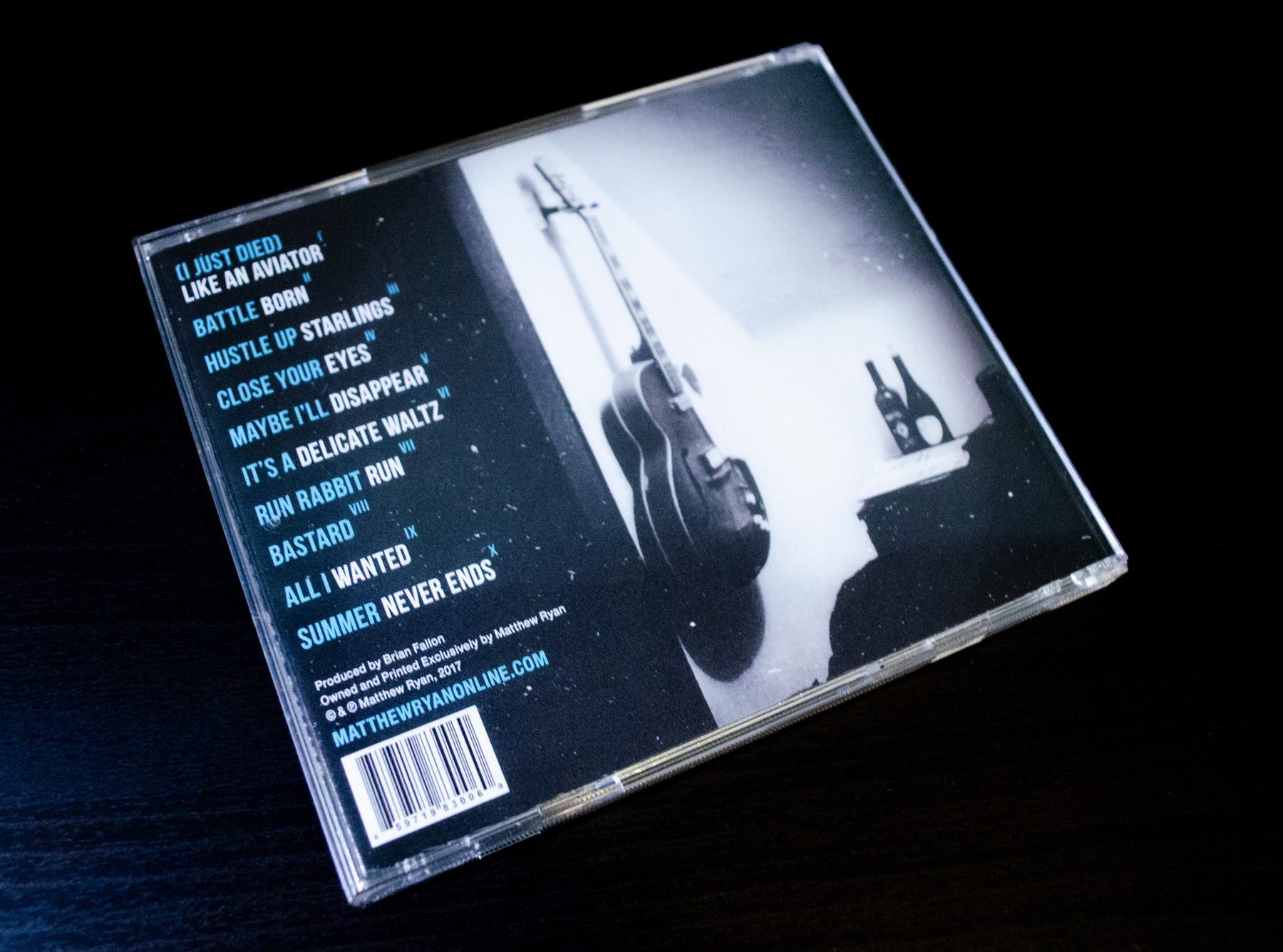 I created 10 social media images that would accompany each song. Our goal was to tell a story in a simple way while tying everything back to the original look and feel of the album packaging. Visually we wanted to create an identity for each song that takes the listener on a journey of highs and lows. Each design is aimed to keep the same fim noir tone and structure, so that it told a story (just like the album). There is a theme of the fear of loss — or fighting against the fear of loss. There is also a theme of perseverance. The record starts with everything falling apart and it ends with a distant and bittersweet memory. And in between? Moments that speak to listeners’ own experiences with love and loss.

We partnered with Baby Robot Media and a community of our peers and got every song featured online through a different media outlet. Each image was used during the launch of each song through personal social channels and through media outlets. Listeners shared each image to help circulate the press about the releases. We were fortunate enough to collaborate with Kris Lattimore for some of the images (“Bastard” and “Summer Never Ends”).

We wanted to give “Hustle Up Starlings” some life with the listeners before jumping the gun on  apparel design. There was no need to rush production on tour merch, and this benefited us in the long run. We found out that the track “Run Rabbit Run” was striking a chord with listeners (and with our own personal lives as well). I always had the image of the “unlucky” rabbit foot in my mind whenever I listened to this song. You feel trapped, but have hope. Don’t let the bastards grind you down. Persevere. We kept the design to a minimalist two-color approach and printed the shirts on Tulex soft cotton. Using the red in only the eyes and the heart played upon our message of never giving up. The foot, on the other hand? Well, I think we can all still relate to that feeling. The shirt became a hit and we had to make multiple pressings to keep up with the demand. There have also been sightings of listeners getting the tattoos of this design (the biggest compliment any designer could receive). 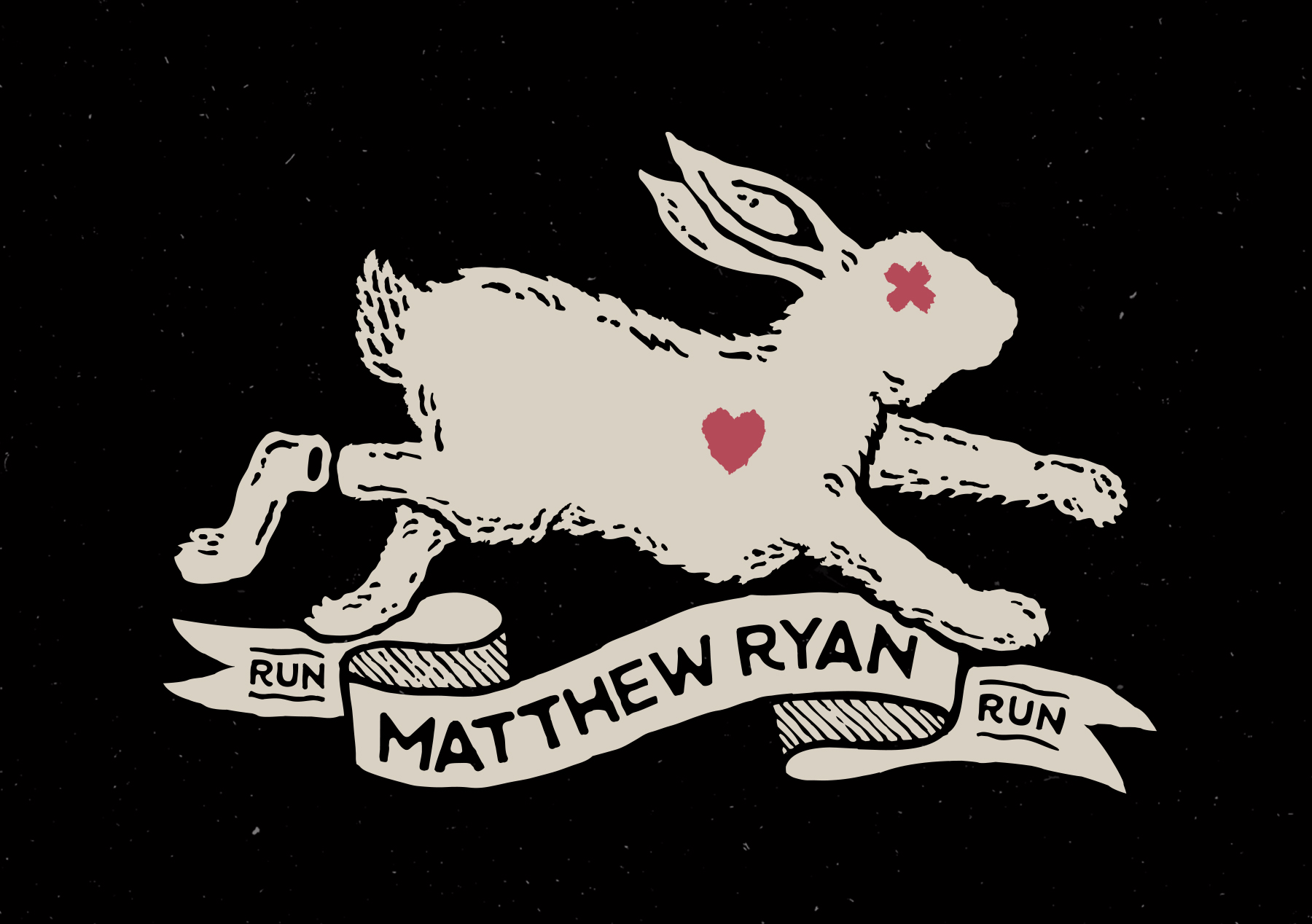 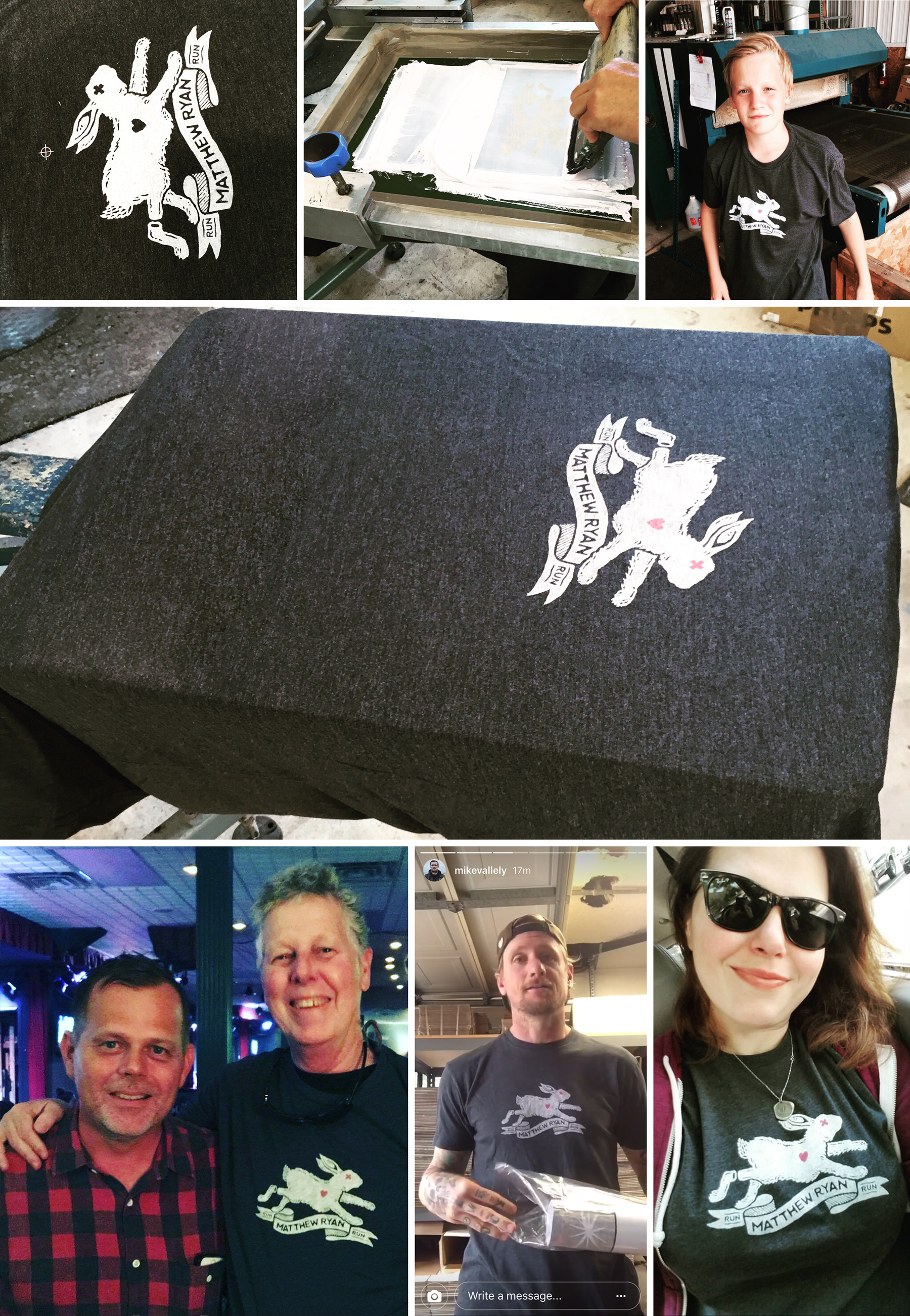 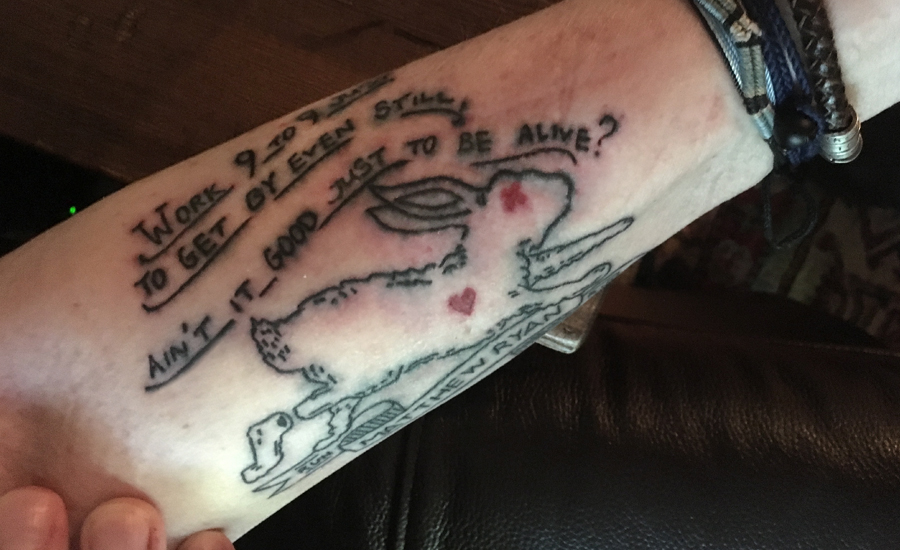 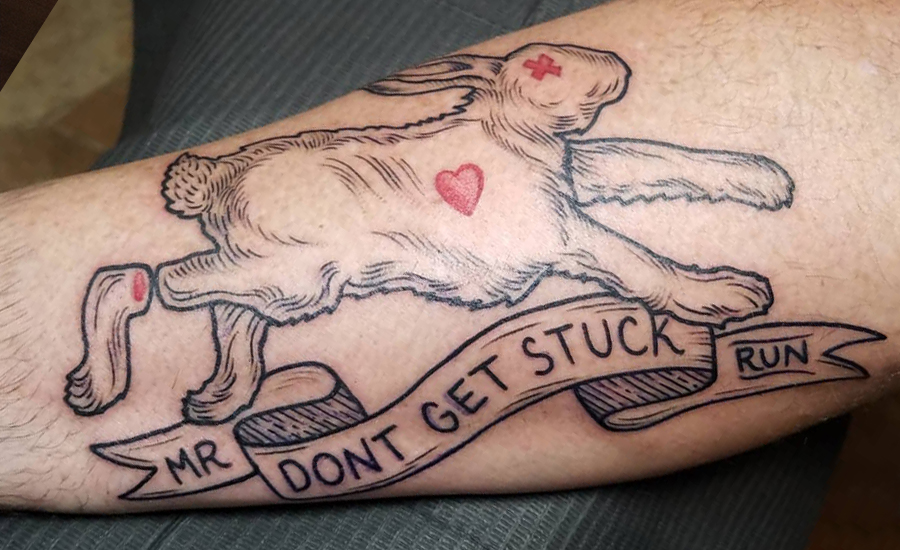 Each single is required to have its own separate album art in order for it to be uploaded onto Spotify. “Aviator” and “Battle Born” deal closely with personal reflection and perseverance, so we wanted to portray two different, but related approaches to a headshot of Matthew Ryan. “Maybe I’ll Disappear” plays upon the feeling of isolation inside your own walls. “Run Rabbit Run” is a spin-off of the shirt illustration and social cover. Finally, “Summer Never Ends” pays tribute to the ones we keep close to our hearts. The design pays also pays tribute to a band Ryan and I hold close to our hearts. 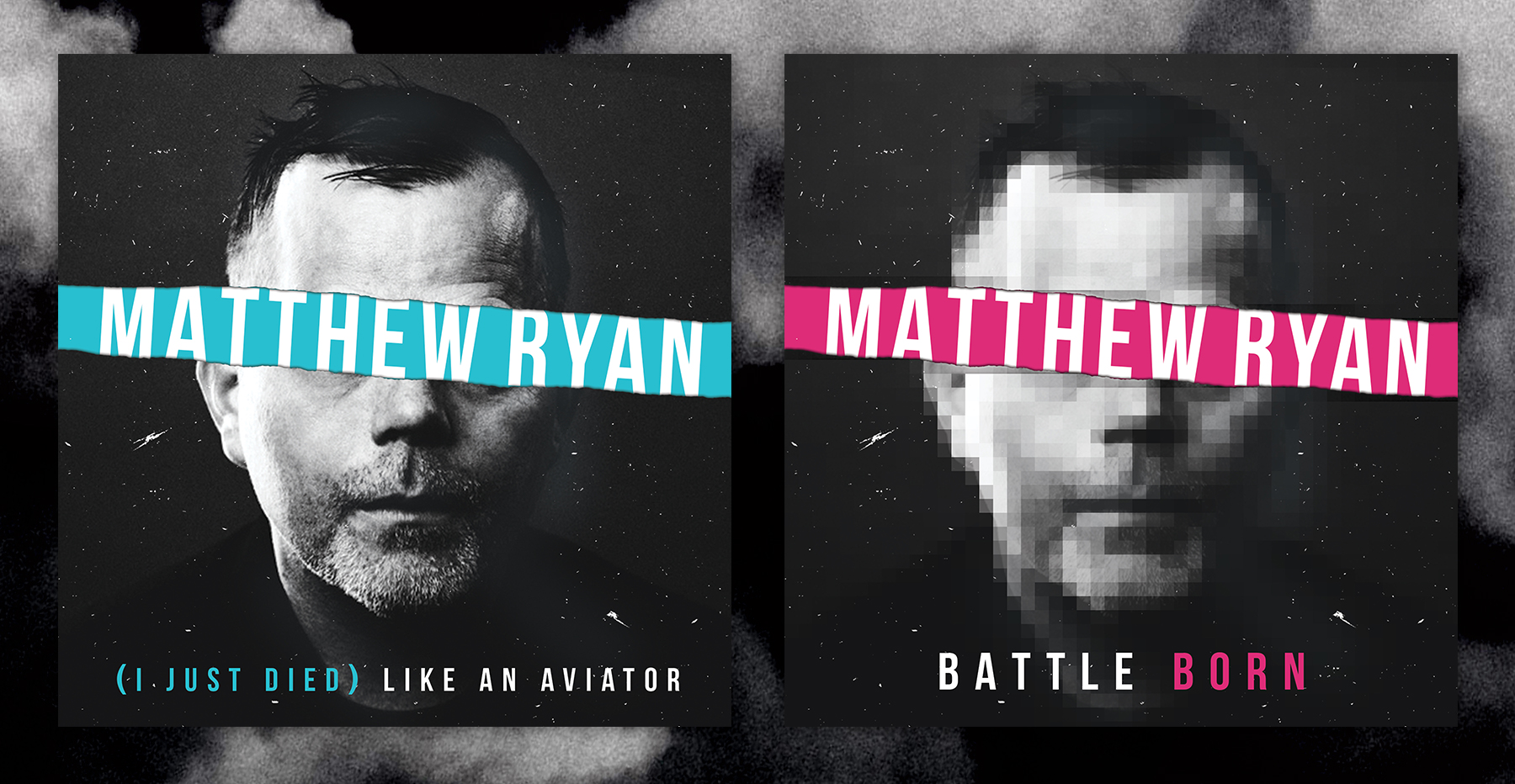 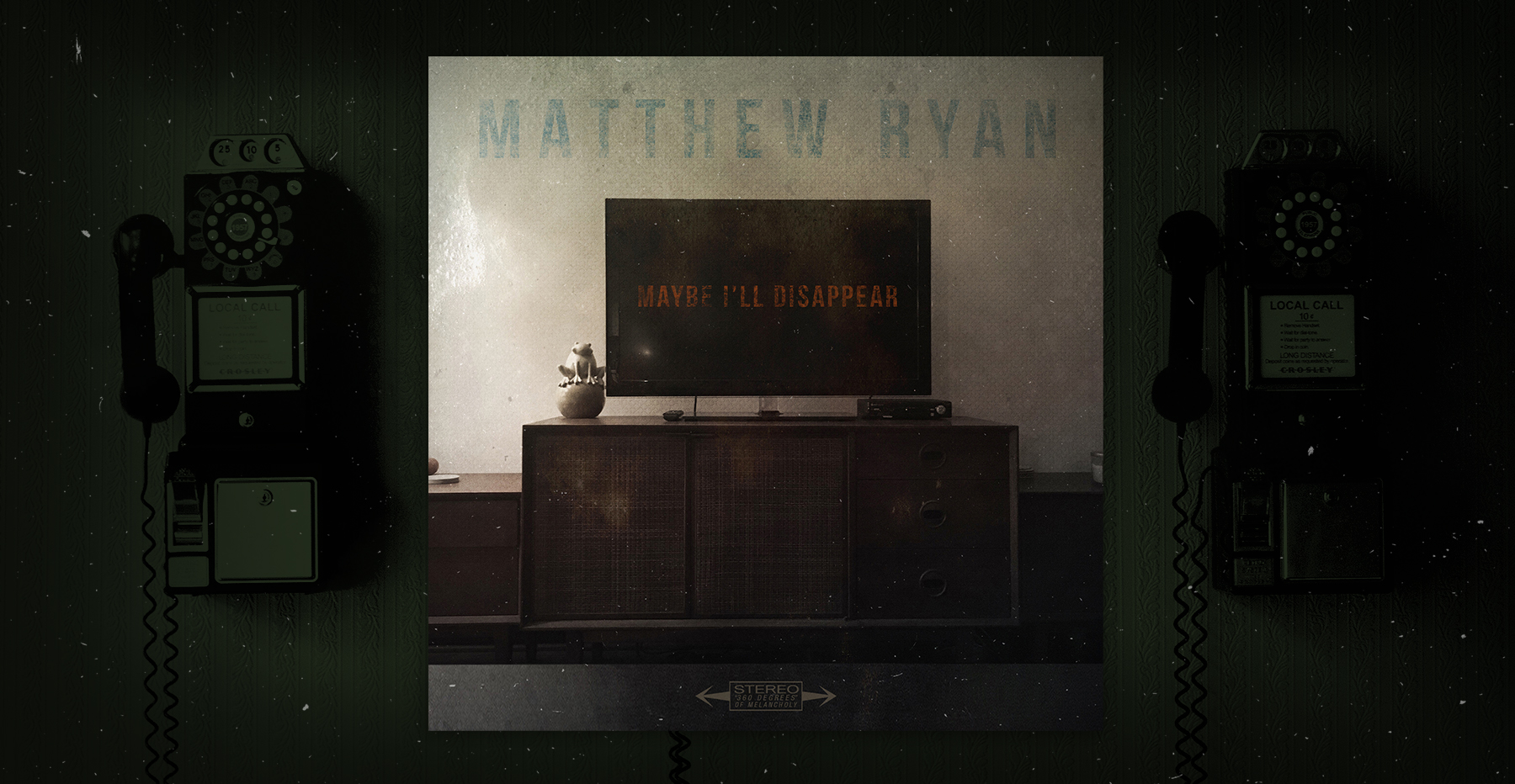 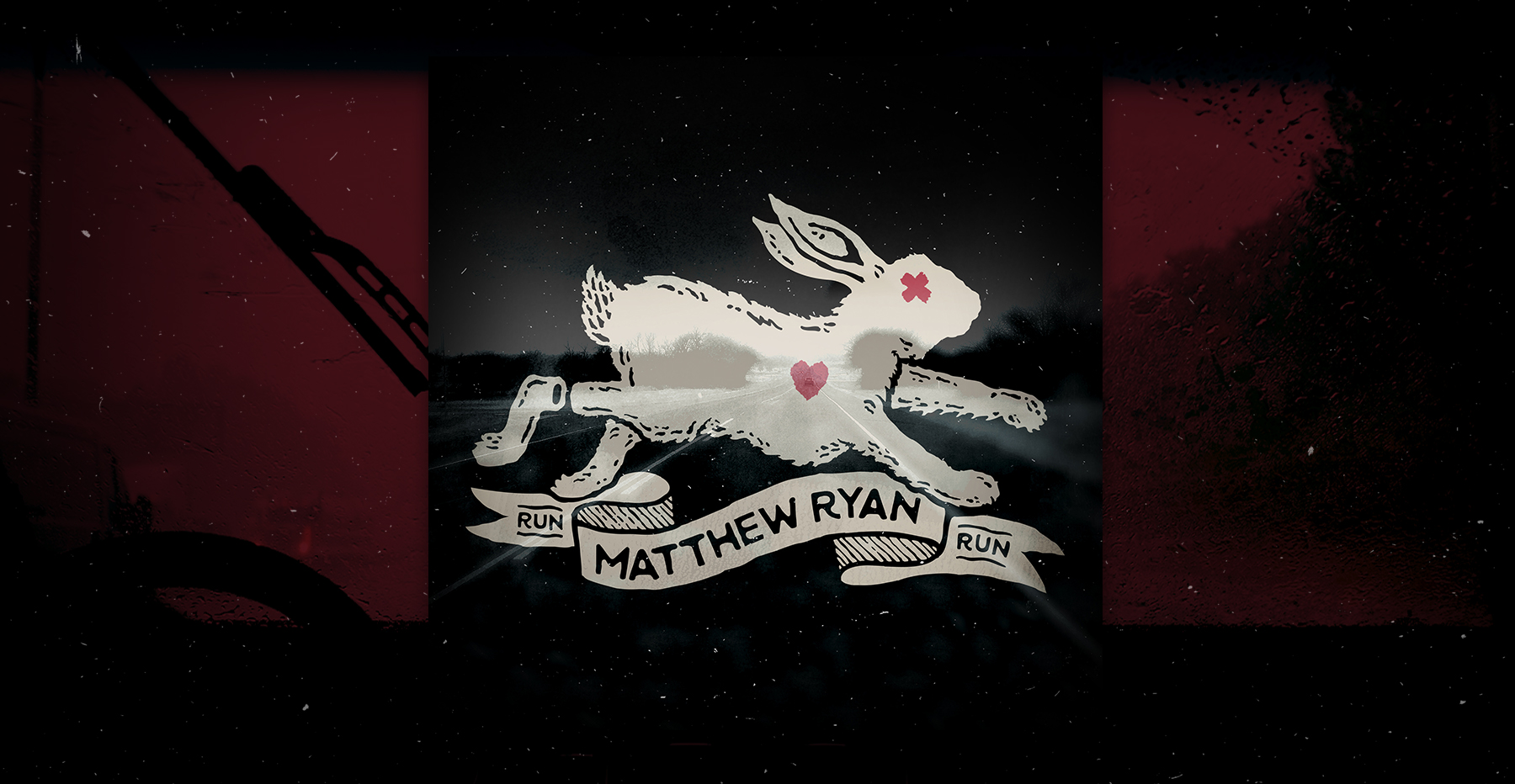 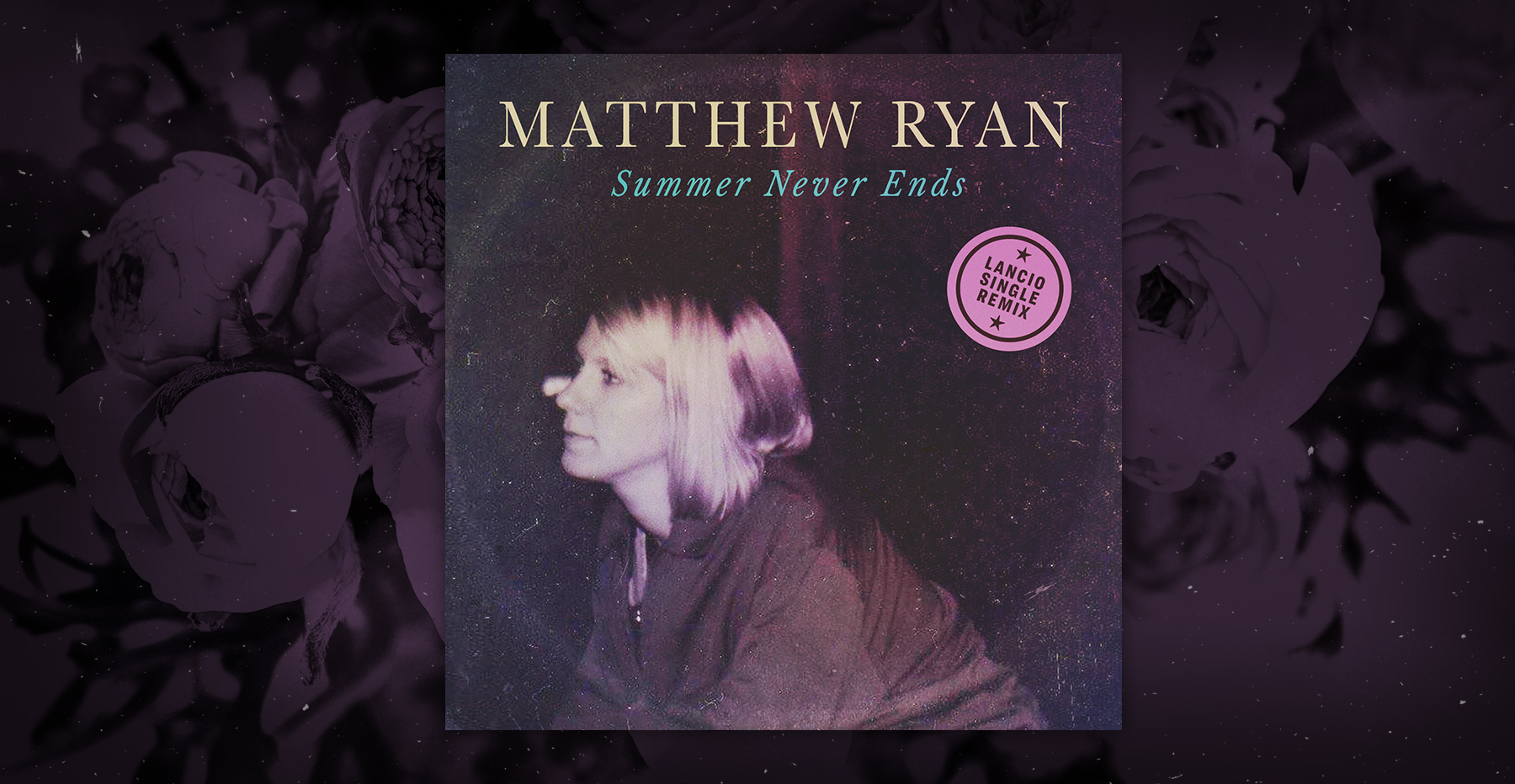 I whipped-up a press sheet for sending to radio outlets and third party media, and it’s also used for PR. It includes a brief overview of the record, media reviews, suggestions on what tracks to listen to first and contact information. 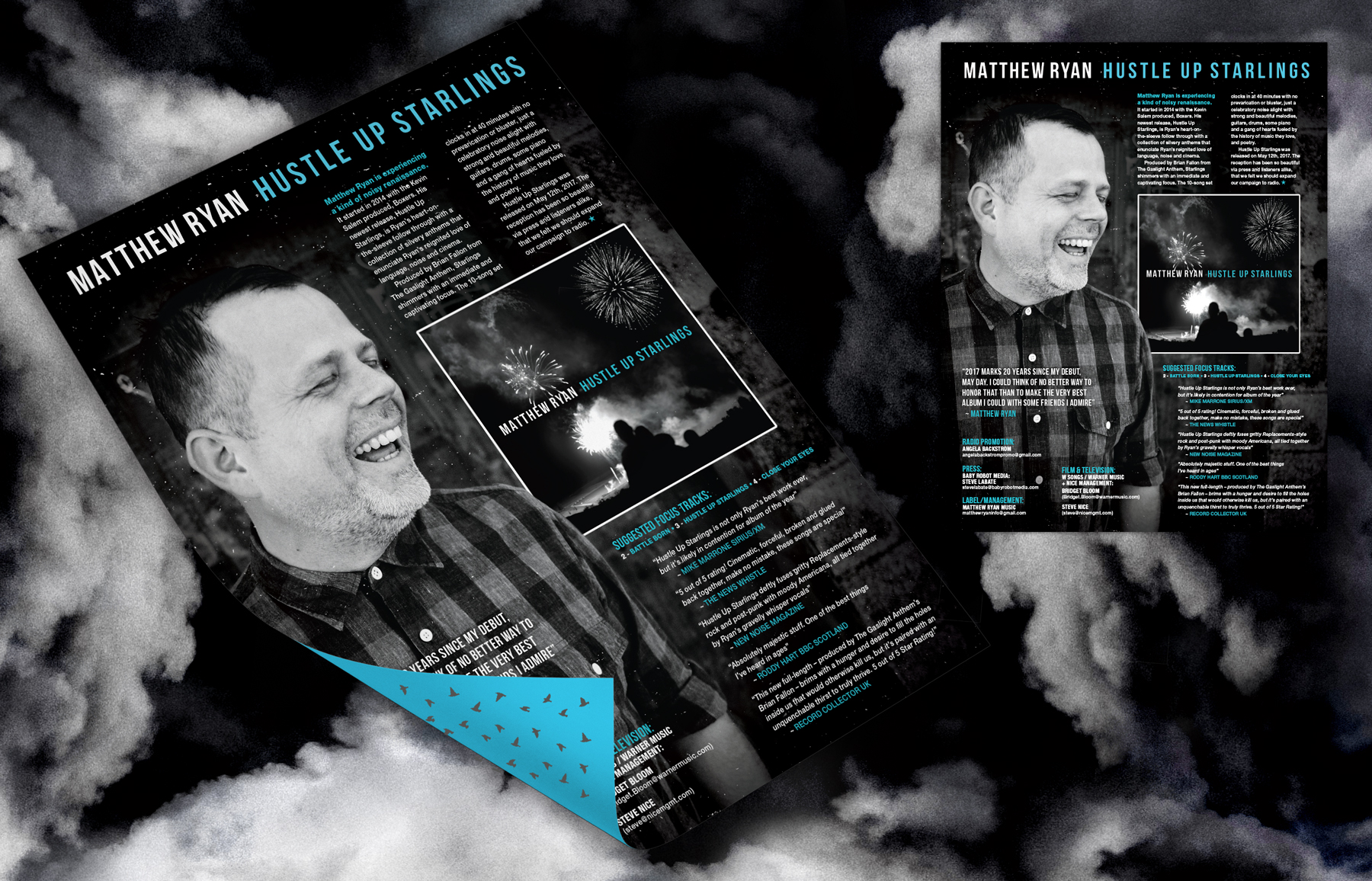 Below is a quarter page print ad that I created for American Songwriter. This ran in print and on their website in native advertising. 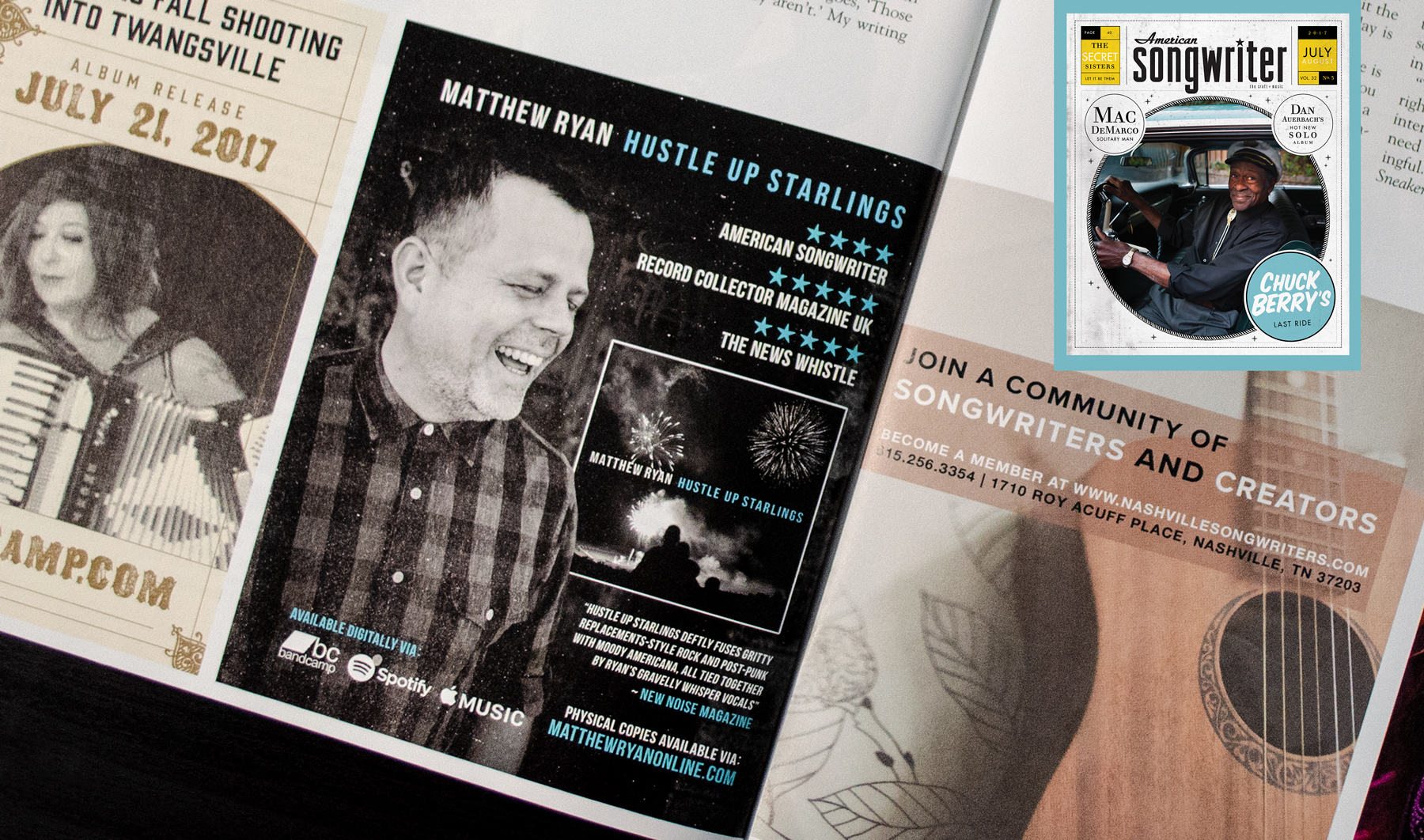 I created a simple wordmark that would be used for touring assets and third party media. Used primarily for promoters who ask for a logo to add to festival line-ups.

Here are a variety of tour assets I’ve designed for Matthew Ryan throughout “Hustle Up Starlings.” This is just a small sample. The gig posters are 11×17 limited-run digital prints that are only available at the shows. Every piece I create is resized for Instagram (posts and stories) and as cover images for Facebook and Twitter. 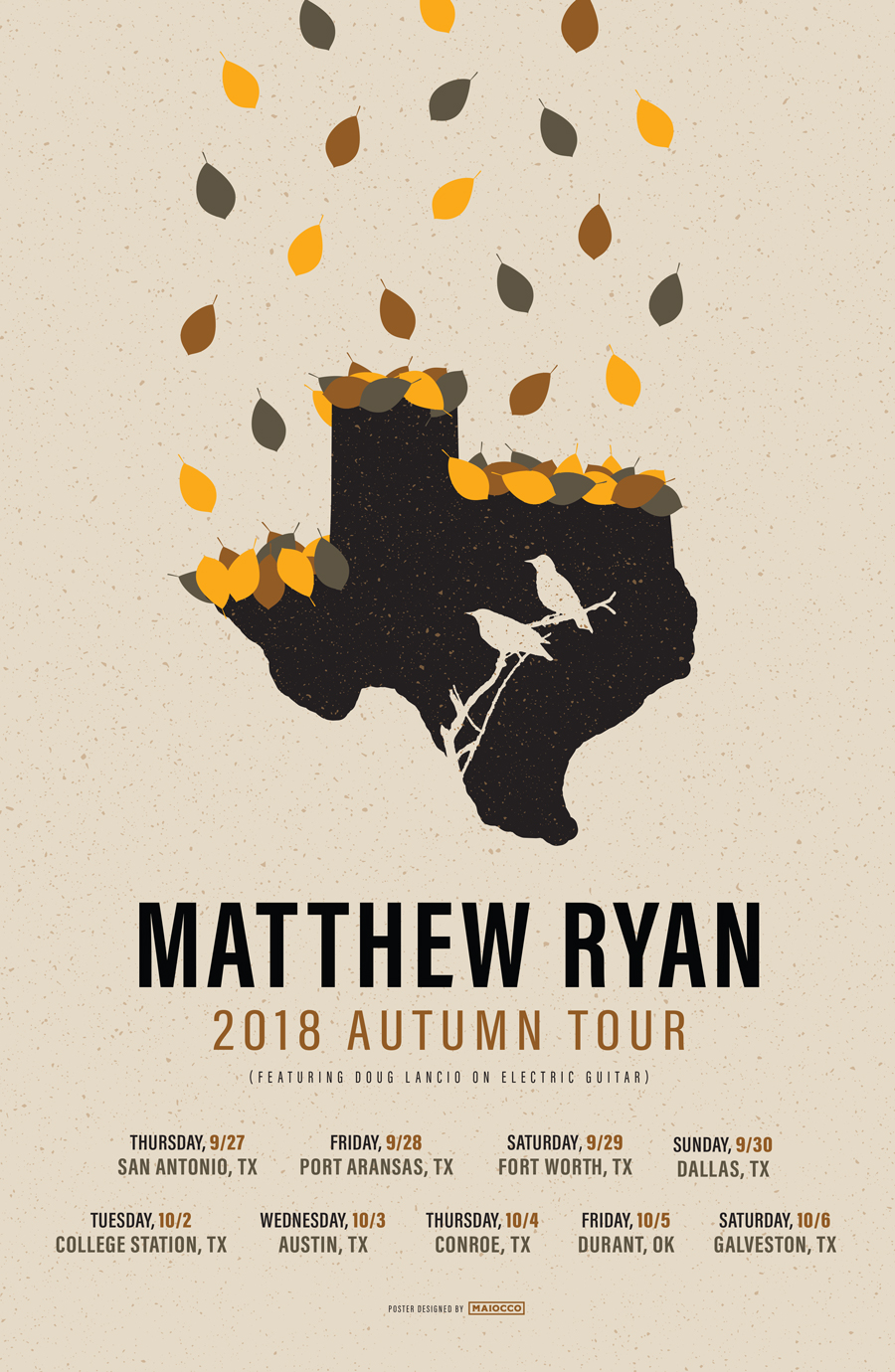 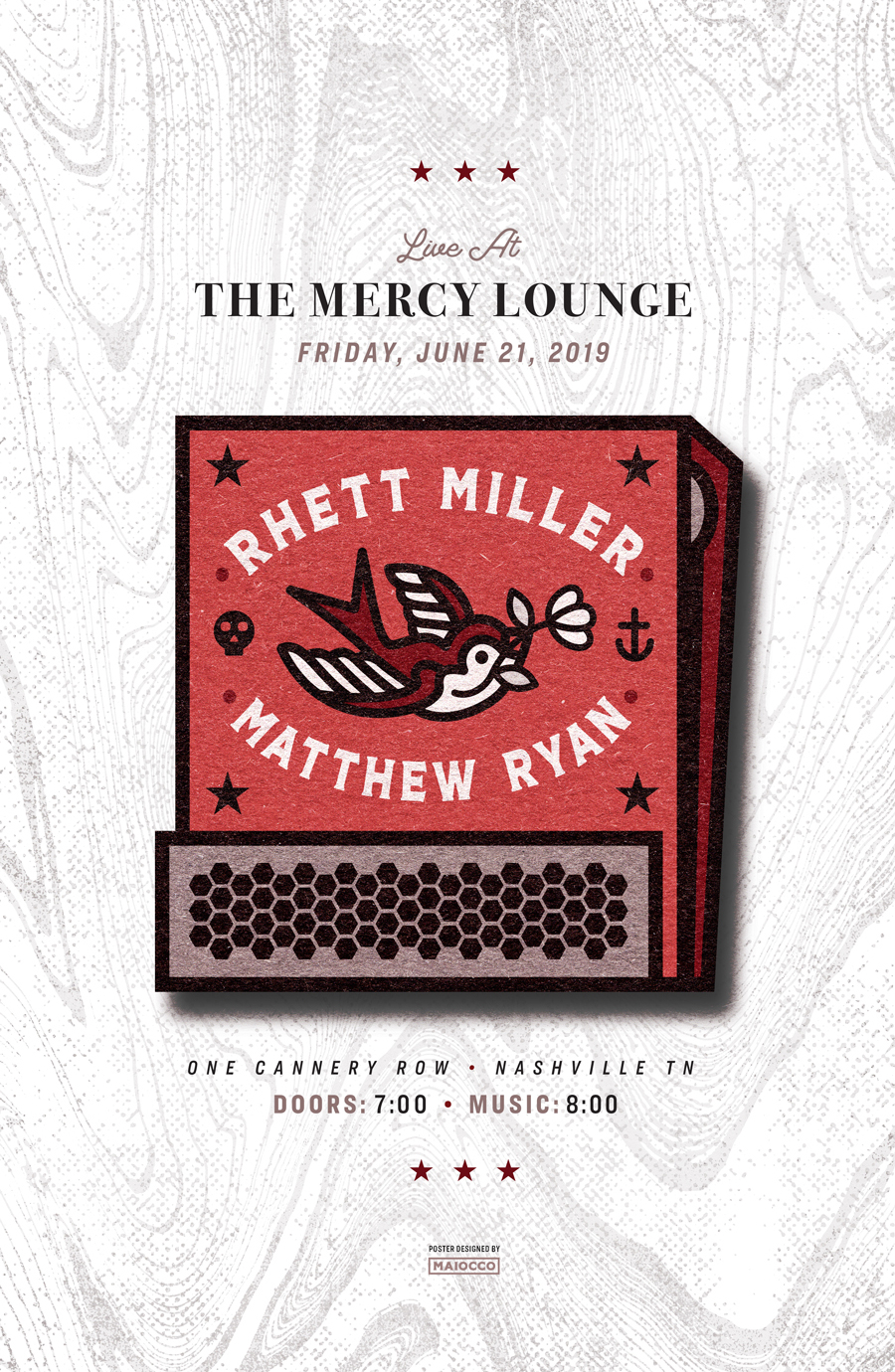 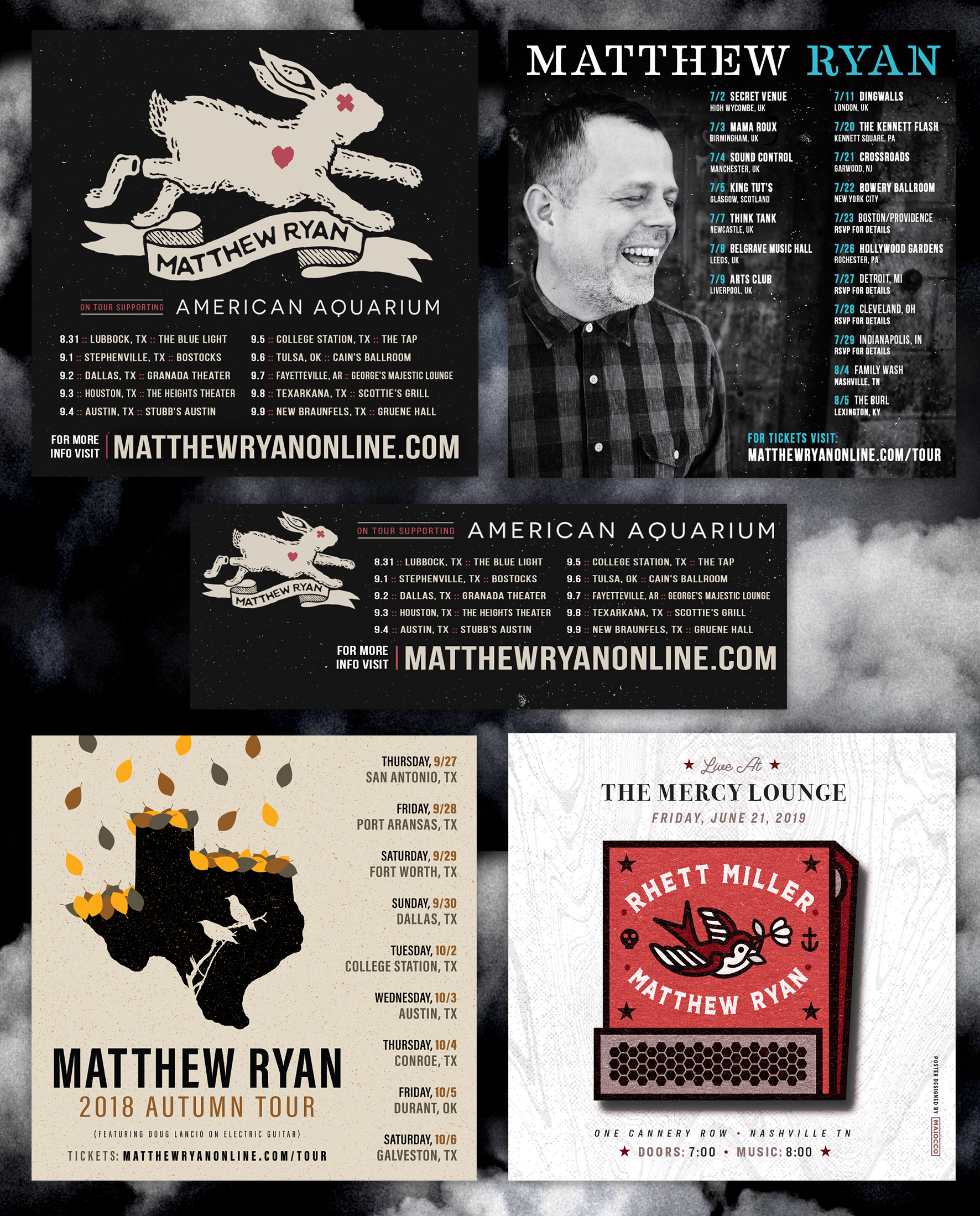 This pure DIY-style video showcases what life is like while on the road. Late nights at the shows, guzzling Starbucks, meeting incredible people and chasing the dream. This was filmed by Matthew Ryan, Brian Bequette and myself during our tour with American Aquarium.

Want your album art and tour support materials to stand out in even the most dimly lit room? Shoot me a message. I got some tricks that could light up the night sky.

Maiocco Design Co. uses cookies. No, it's not like Oreos, Chips Ahoy or Famous Amos cookies. We wish, but instead, we have a lame non-edible tech rendition (thanks Europe...). Learn more about HTTP cookies.