Our heroes deserve the best support possible. We deliver.

About the Semper Fi Fund

The Semper Fi Fund provides urgently needed resources and lifetime support for wounded, critically ill and injured members of the U.S. Armed Forces and their families. Case managers from the Semper Fi Fund work one-on-one with service members and veterans in order to understand and support their individual needs immediately and throughout their lifetime. They are known for keeping their overhead low, which results in a greater impact on the lives of service members and veterans. The Semper Fi Fund has been awarded the highest ratings from charity watchdog groups for six consecutive years: A+ from Charity Watch, one of only two veteran nonprofits to receive this rating, and Four Stars from Charity Navigator.

During the holiday seasons, Semper Fi Fund works with The Bob & Renee Parsons Foundation on a fundraising event. The goal? To raise $10 million dollars. If met, Bob Parsons would provide a matching donation to help military veterans and their families.

Bob is the founder of GoDaddy, a U.S. Marine Corp veteran and recipient of the Purple Heart, Combat Action Ribbon, and Vietnamese Cross of Gallantry. His investment into helping the lives of military families is inspiring and much appreciated.

I partnered with Stacey Benson to launch an effort to help raise the funds needed for the donation match. Stacey is one of my favorite go-to photographers. She is also a graphic designer, website administrator and internal events coordinator for the Semper Fi Fund. First, I worked with Stacey to feature Semper Fi Fund on the November issue of “Military Spouse” magazine. We showcased the wonderful efforts of the nonprofit while promoting the need to support the campaign. Stacey and I collaborated on the photography to guide the diverse audience base Semper Fi has helped. The magazine has a distribution of 75,000 on military bases throughout the country and overseas. We also promoted the magazine launch on respective social media channels to announce the fundraiser.

From there, we expanded the shot reel to be used for a month long campaign of billboard advertising in Times Square. Working within the tight parameters was a challenge, but we were pleased with the results (see end of this case study).

Many thanks to Stacey for allowing me to be a part of this project. It’s an honor to work with the Semper Fi Fund and give back in such an amazing way. To be able to say that our art was featured during the holiday shopping season in Times Square is a design achievement that I will never forget. It means even more knowing the work benefited the lives of military families.

Photography, Editorial, Out of Home Advertising

“Joe is an absolutely brilliant designer. His vision and direction is spot on and second to none. I was blessed to have Joe to contact me about collaboration on several different projects and I am always blown away. During our collaborations, I would use his direction to create specific imagery for his projects, he would take my images and craft them into a wonderfully compelling story. He has a way with words – to tell a story like none other. Just take a look around his website, you’ll be blown away by his talent. If you don’t believe me, just ask any of his other clients!” 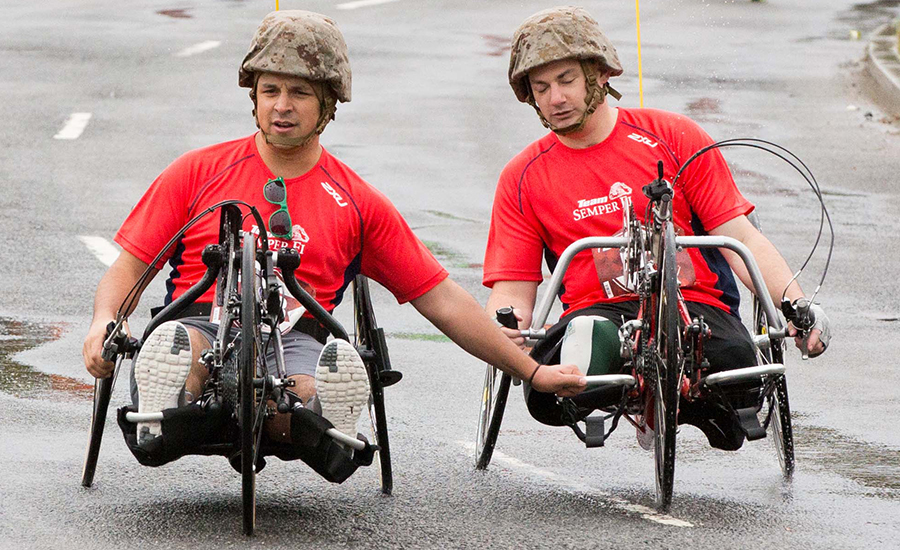 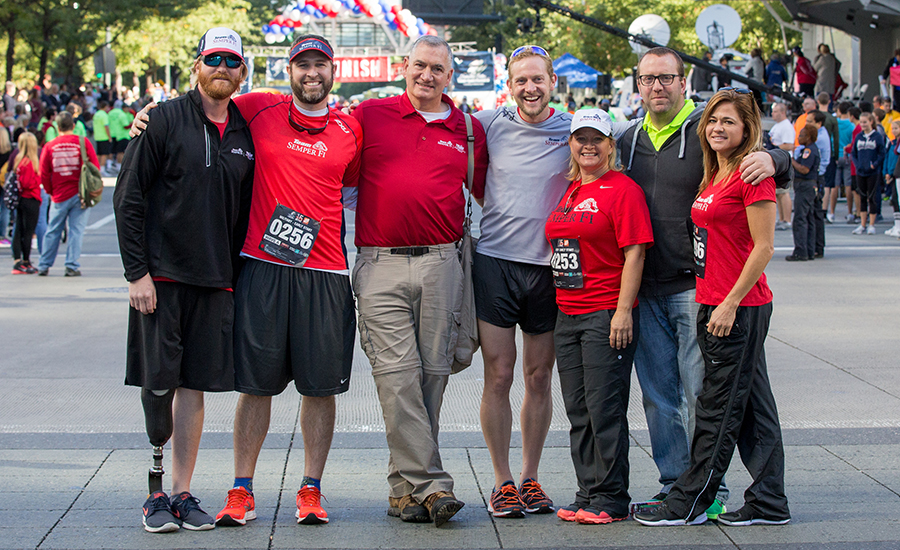 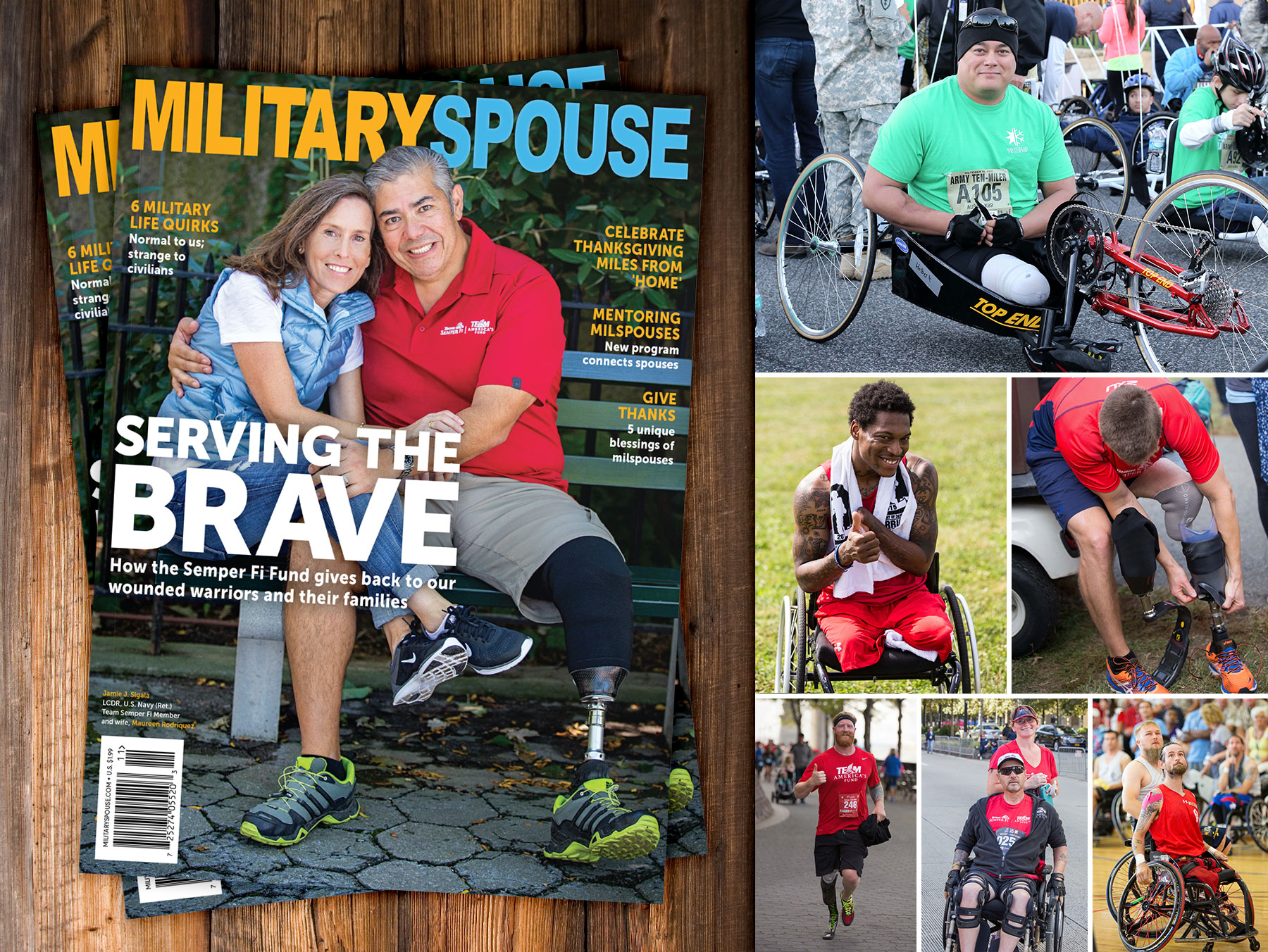 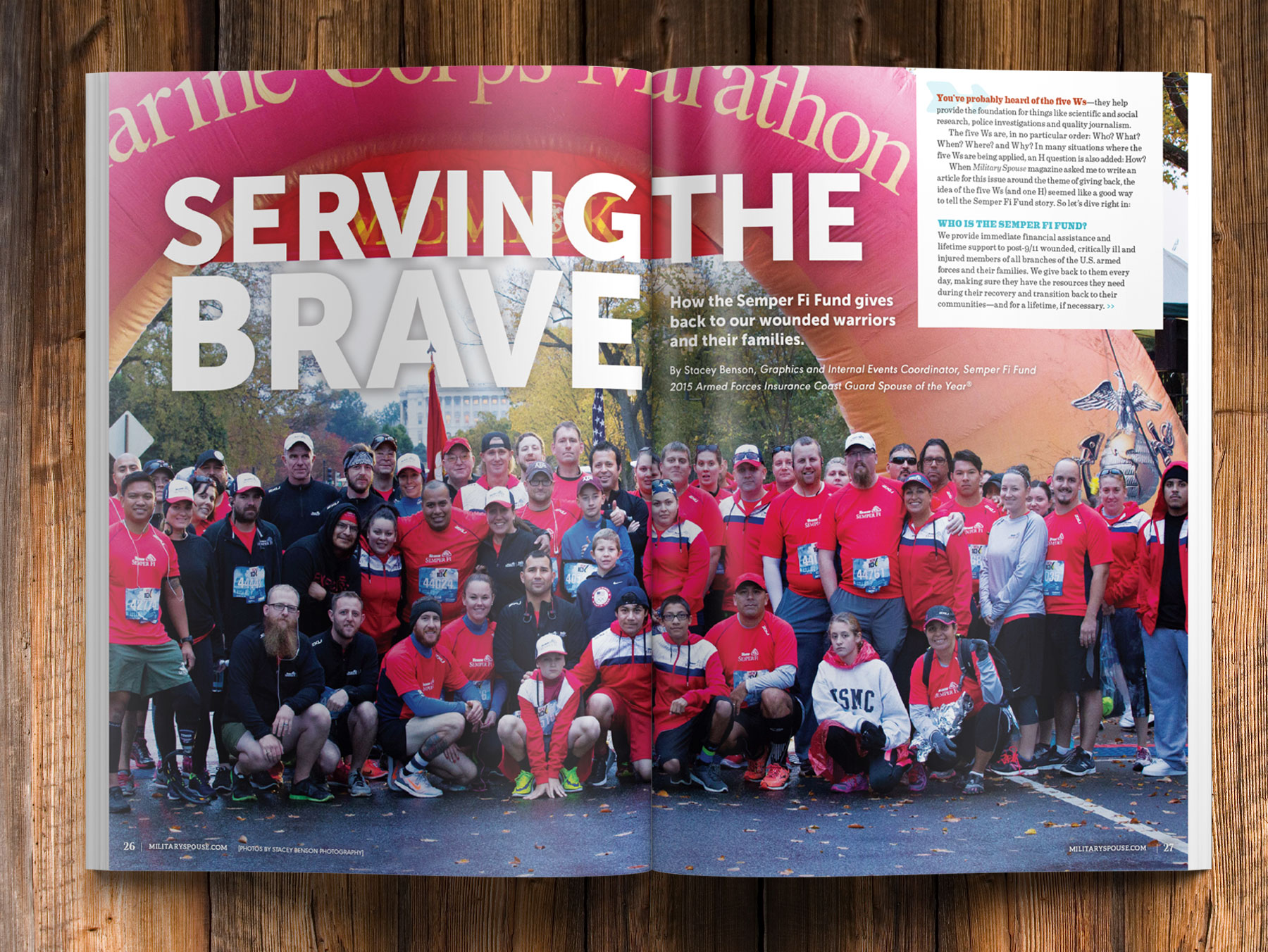 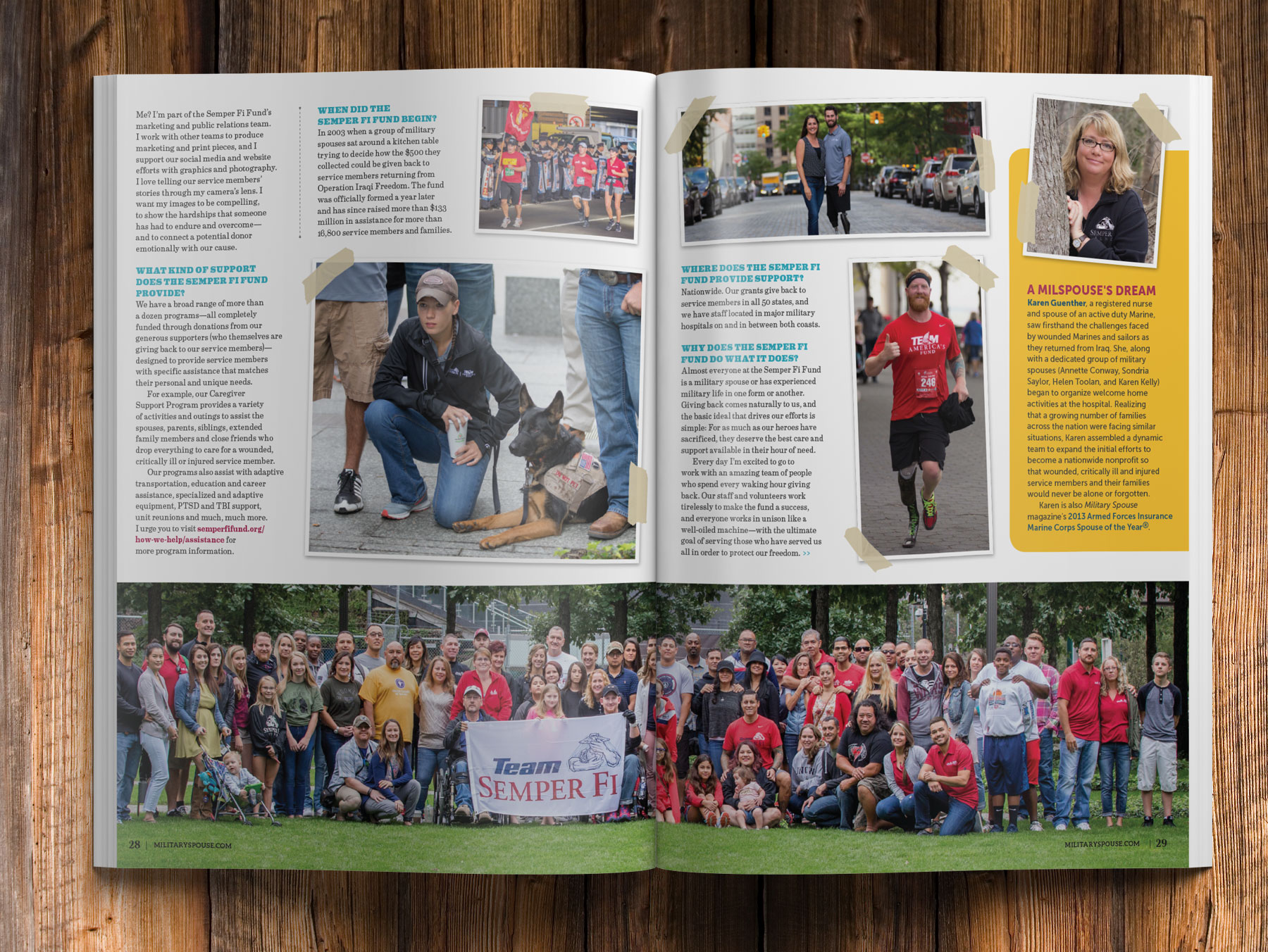 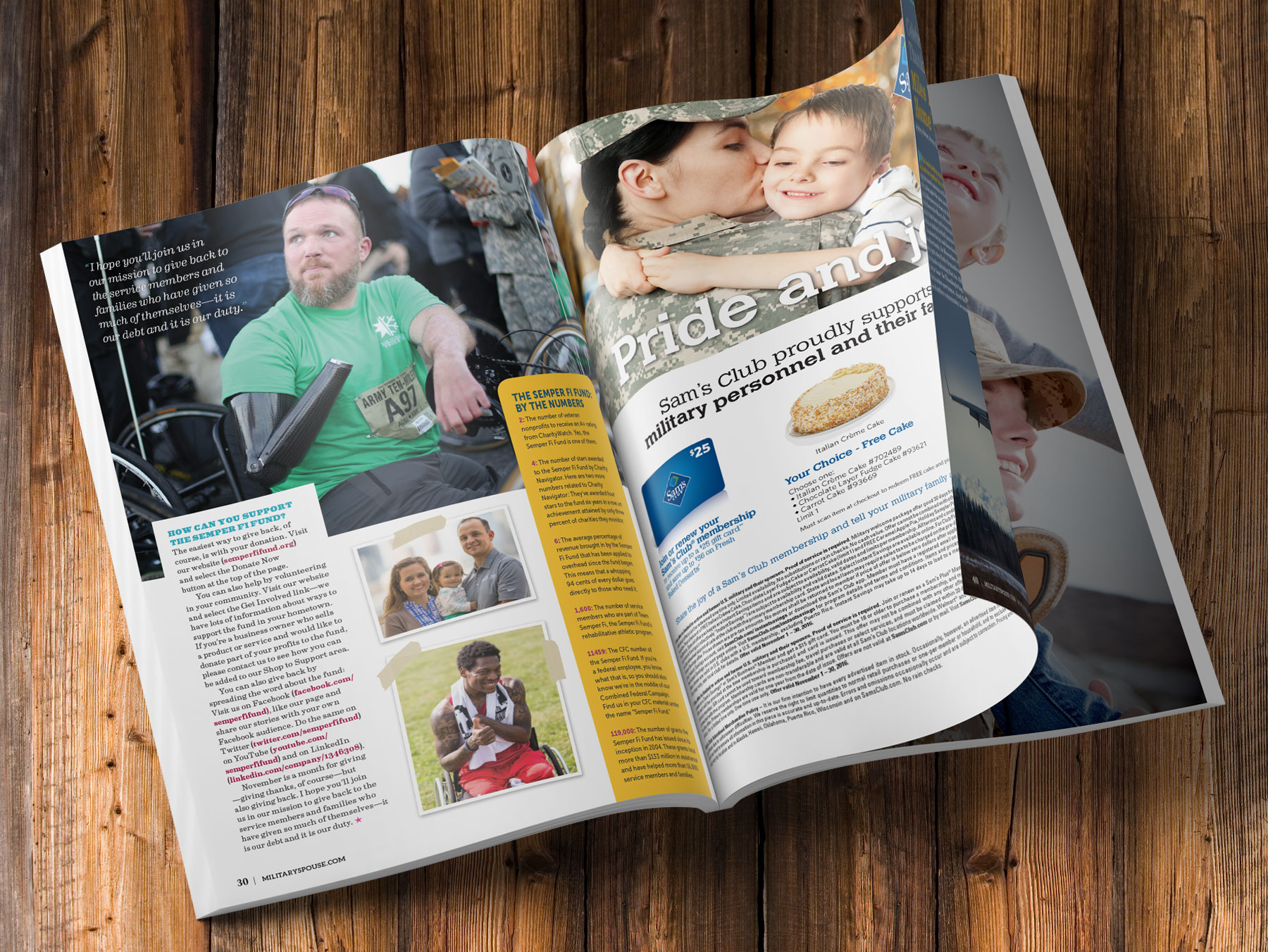 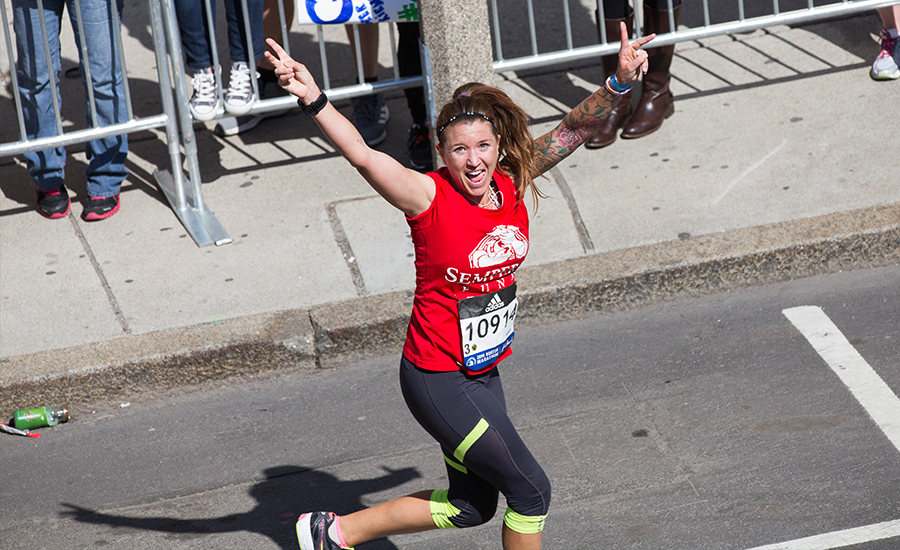 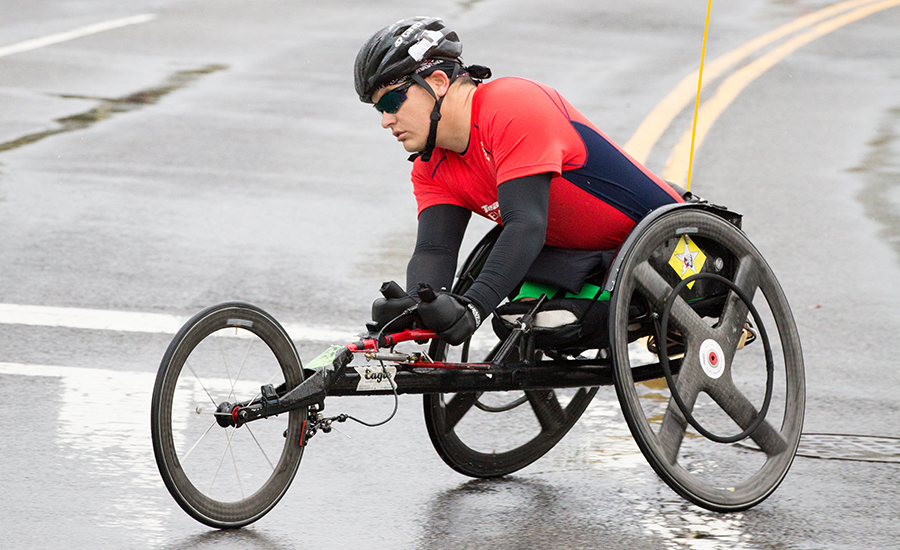 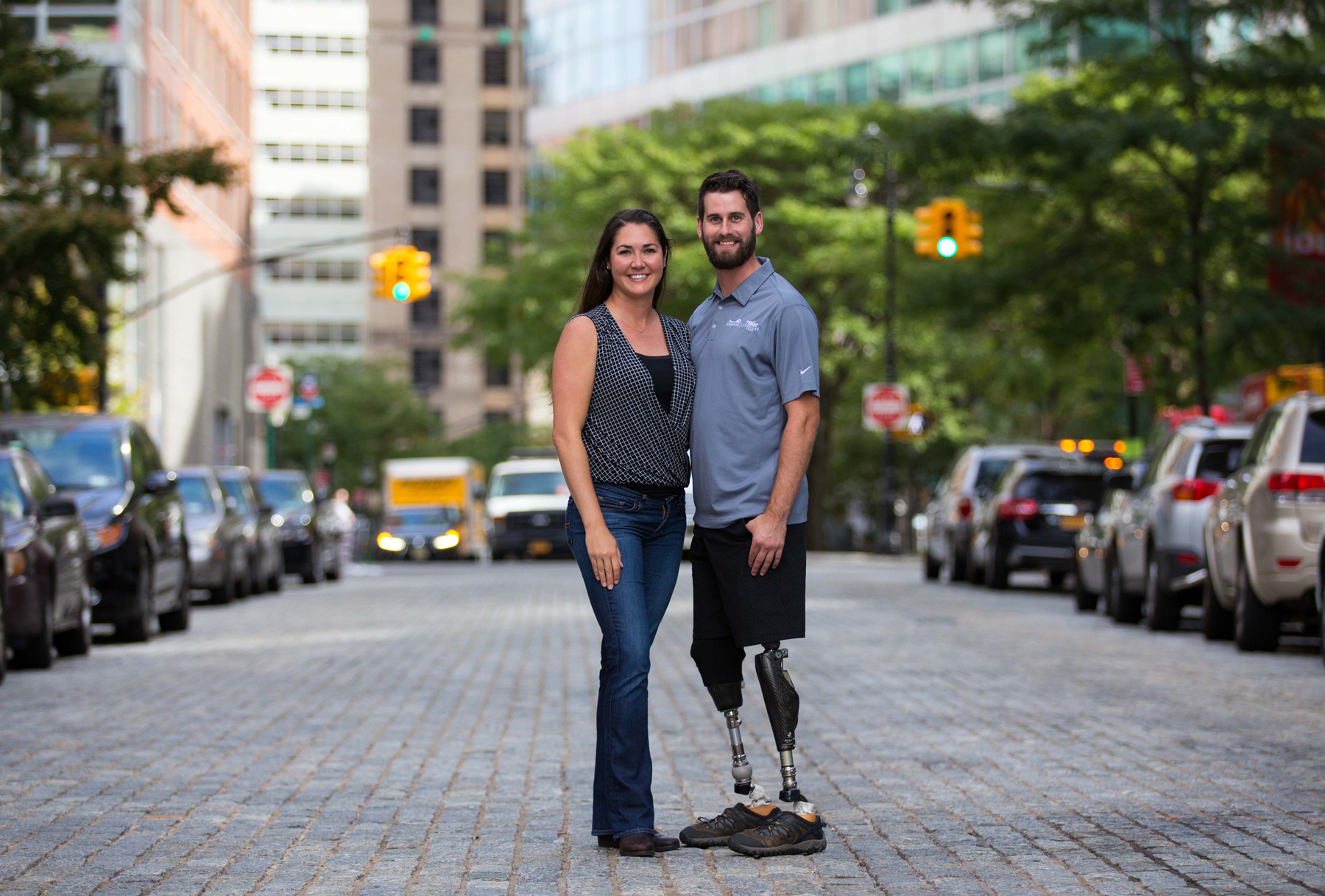 Not sure if you know this, but Times Square is a little hectic. Who knew?!?! They say that around 330,000 thousand people a day visit Times Square. It can increase more during the holiday shopping season. So now you have to ask yourself, how do you make someone look-up and engrain a memory within a small time frame with such visual competition?

Our solution: Fast imagery rotations that reflected the Semper Fi Fund’s audience. There was no need to overthink the imagery for this campaign. The photos remind us of the sacrifices our friends have made for us. It’s our turn to help them.

Image sets would rotate every three seconds. We were challenged to work in very constricting panels due to the nature of the billboards. It was key to keep imagery separate instead of wrapping the design. Also, with such little time transitions, we had to keep a simple call-to-action.

The video above will show you mock-ups of the design layouts at every angle in Times Square. Below is another video of the main monitor shot in real-time. 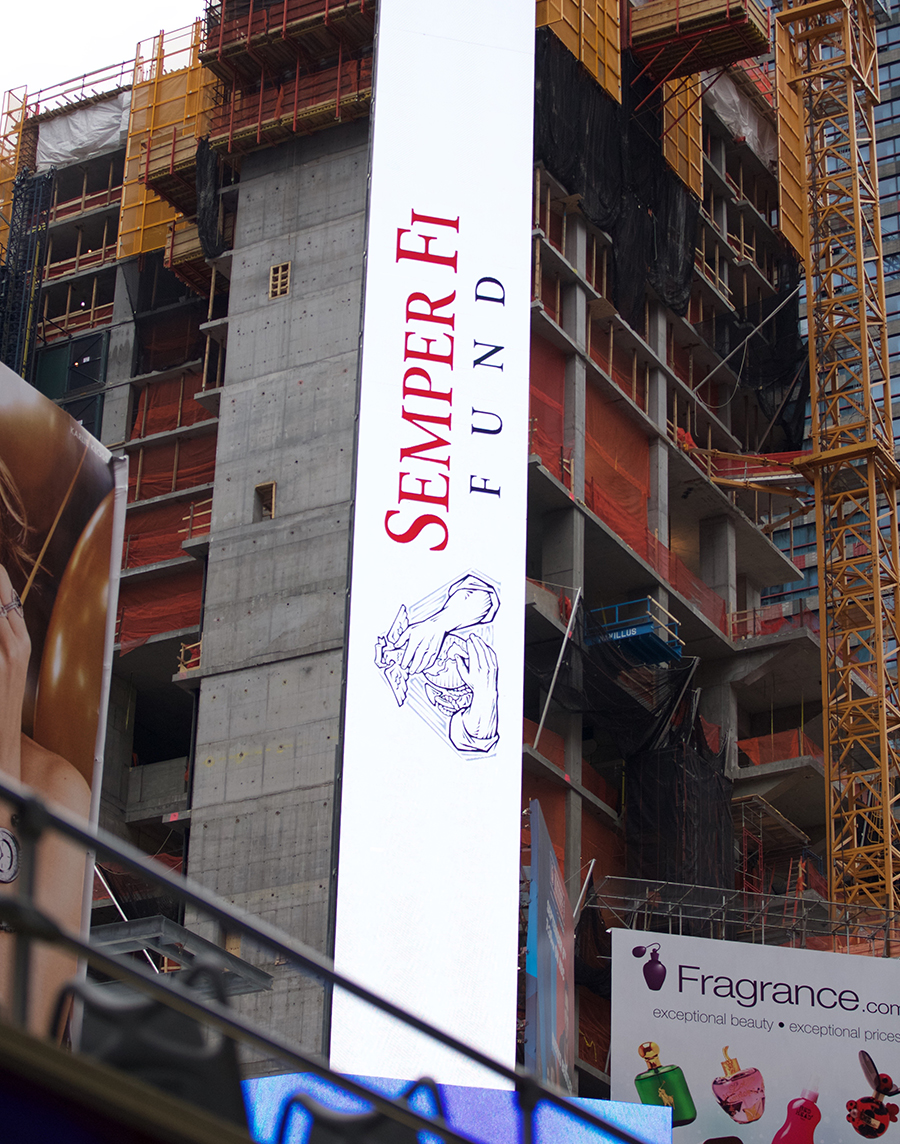 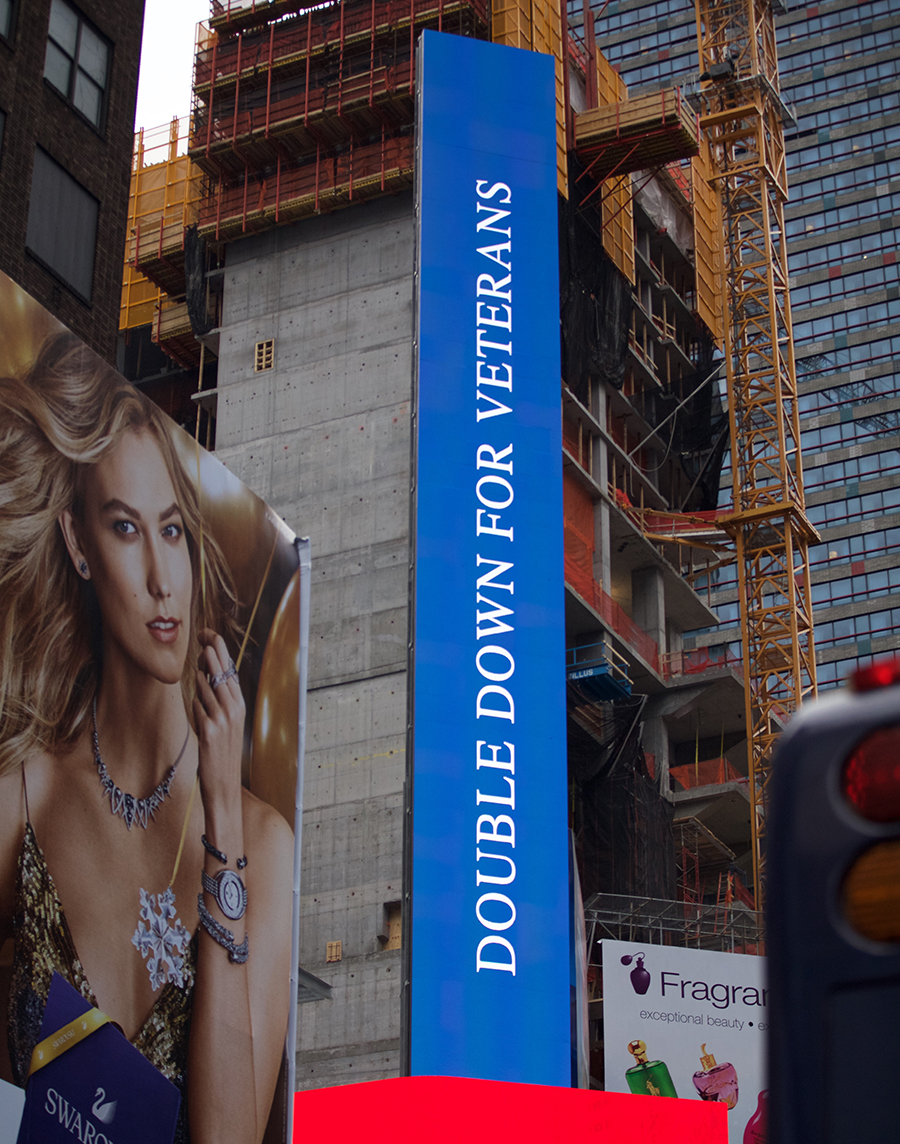 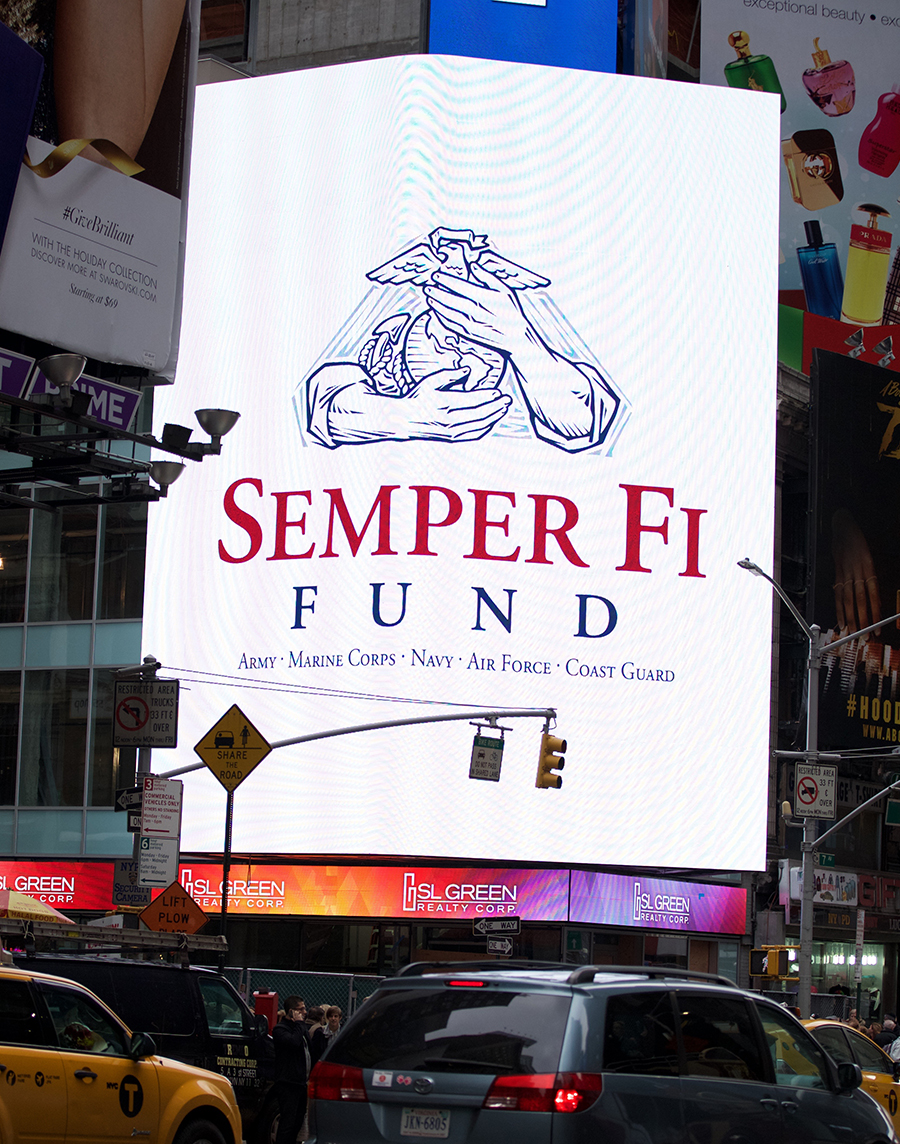 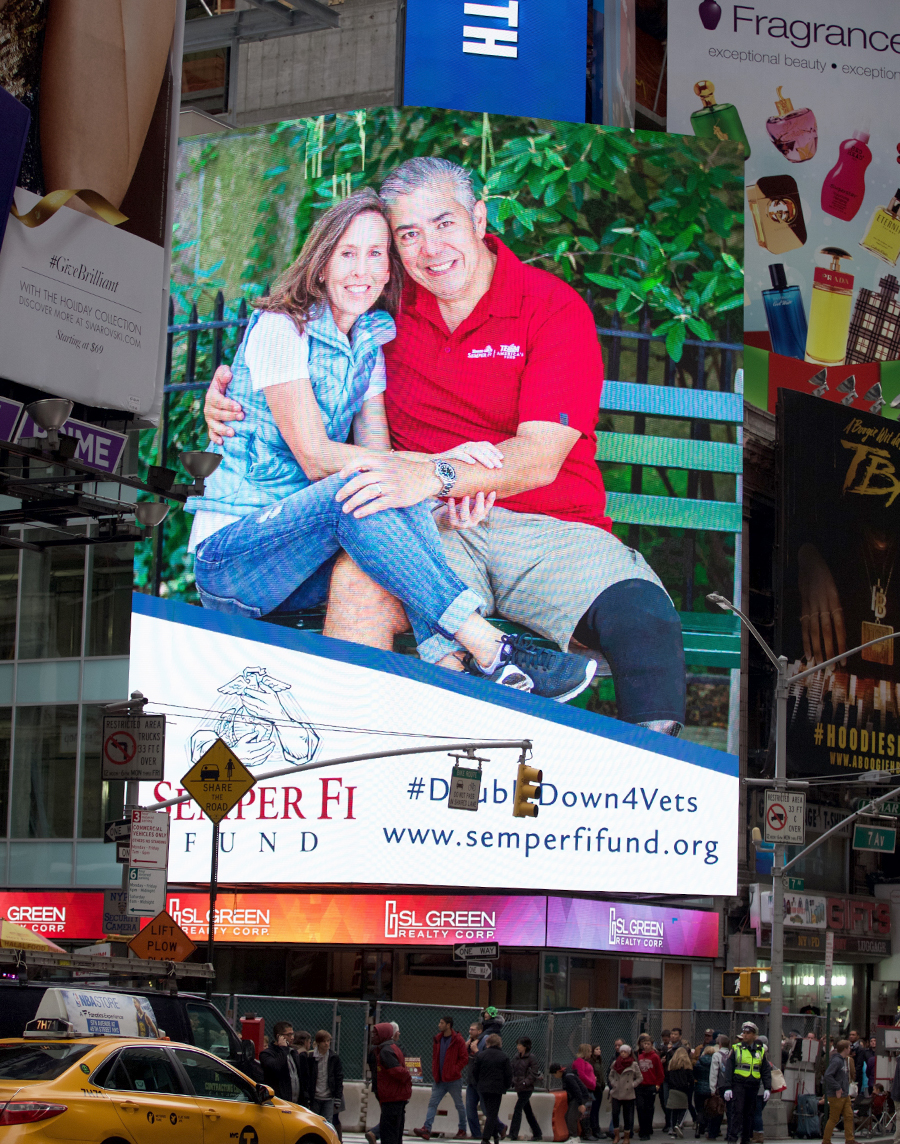 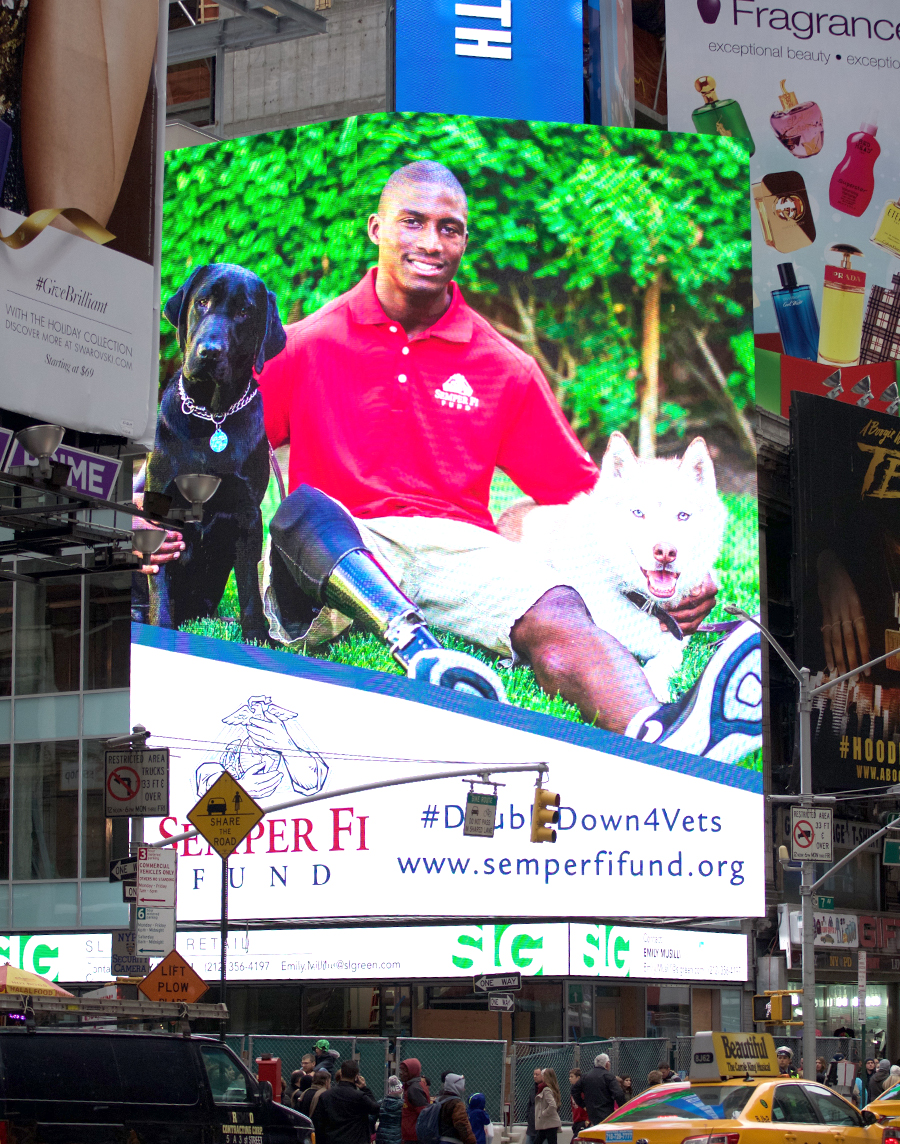 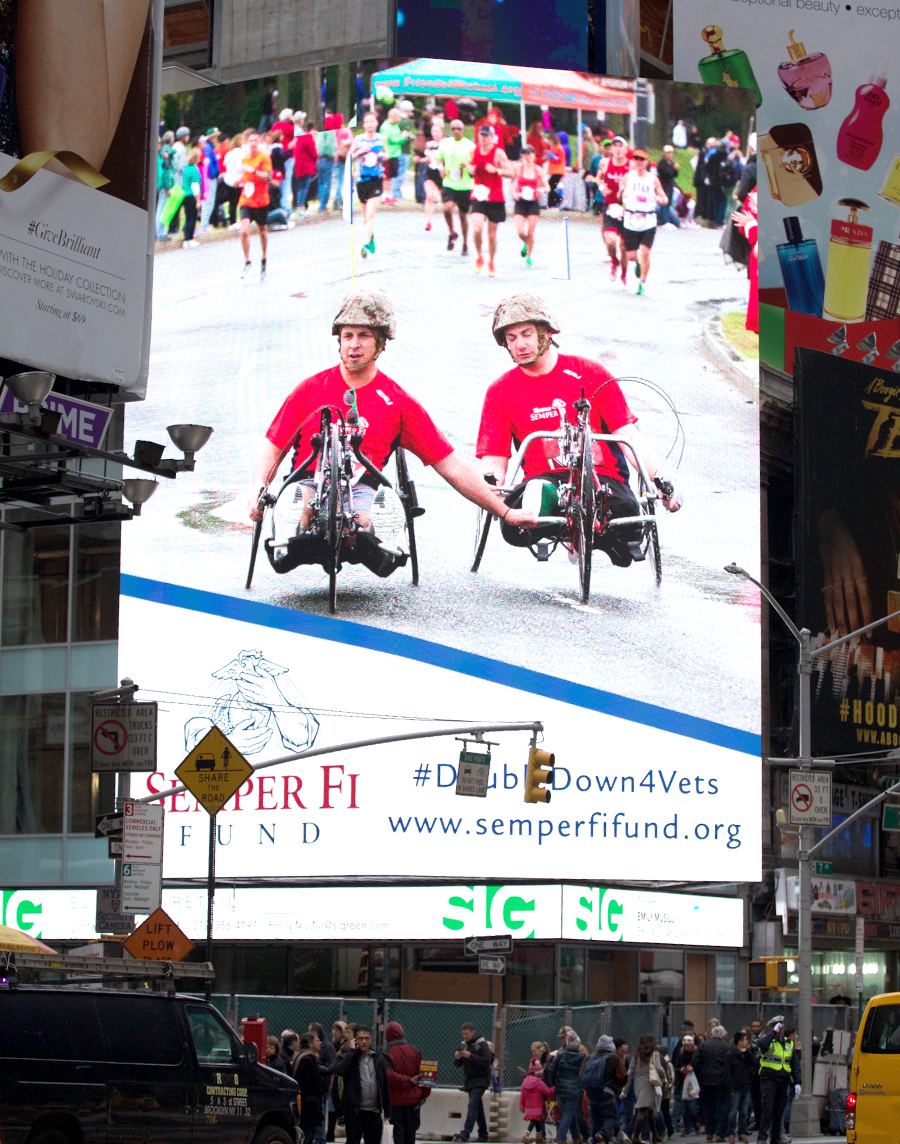 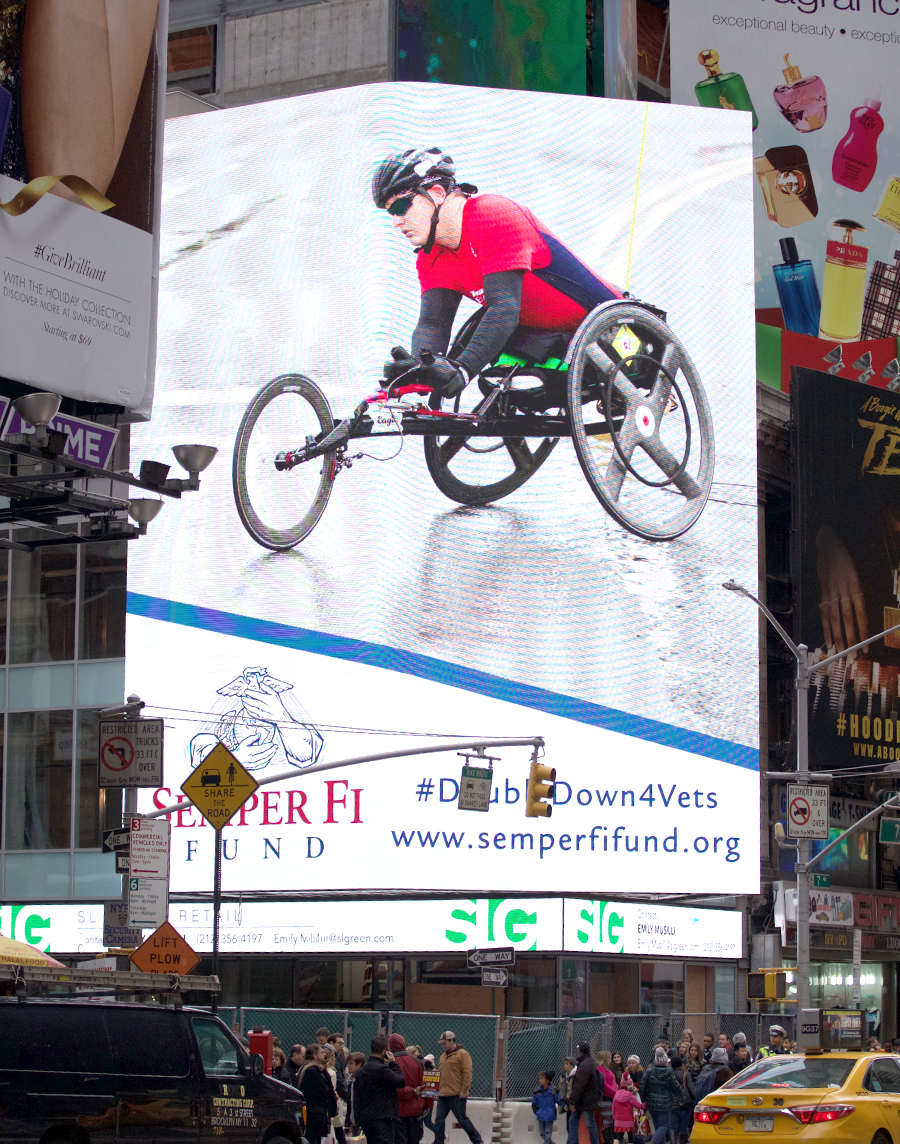 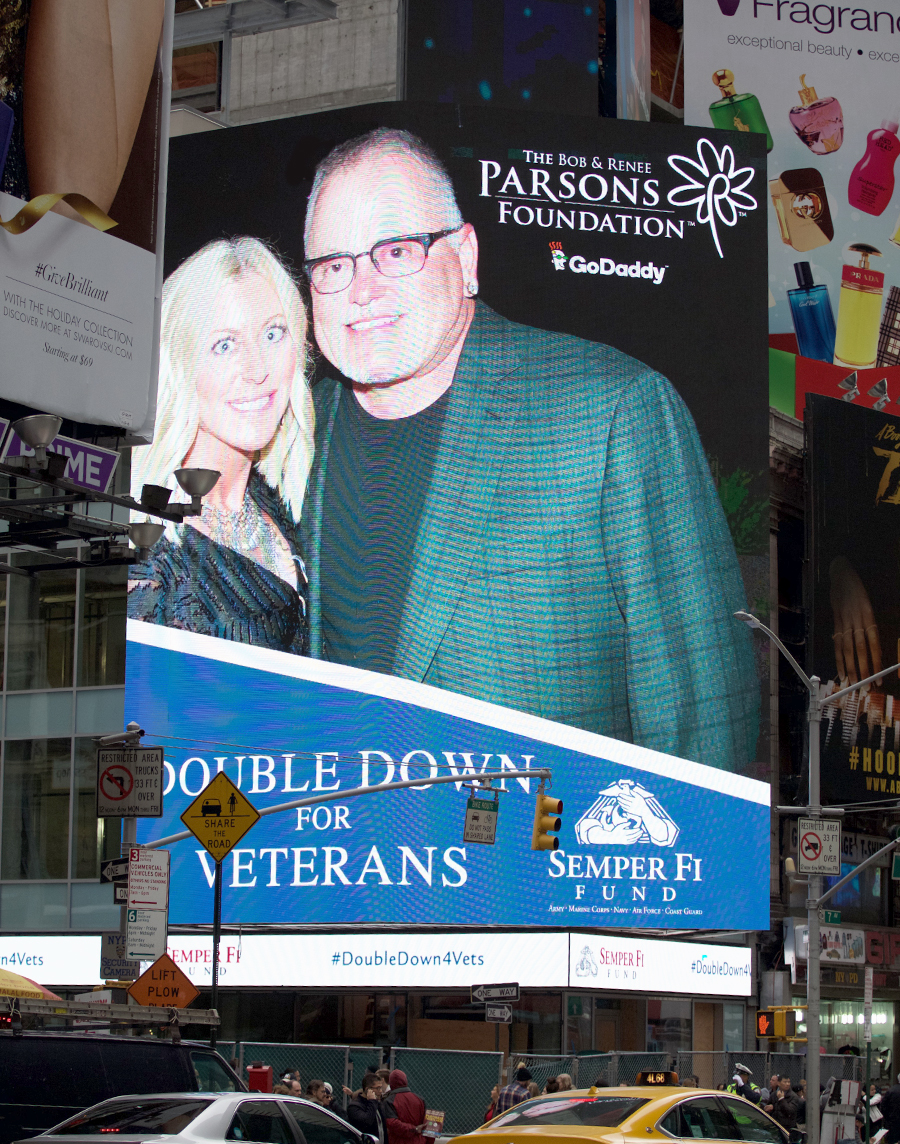 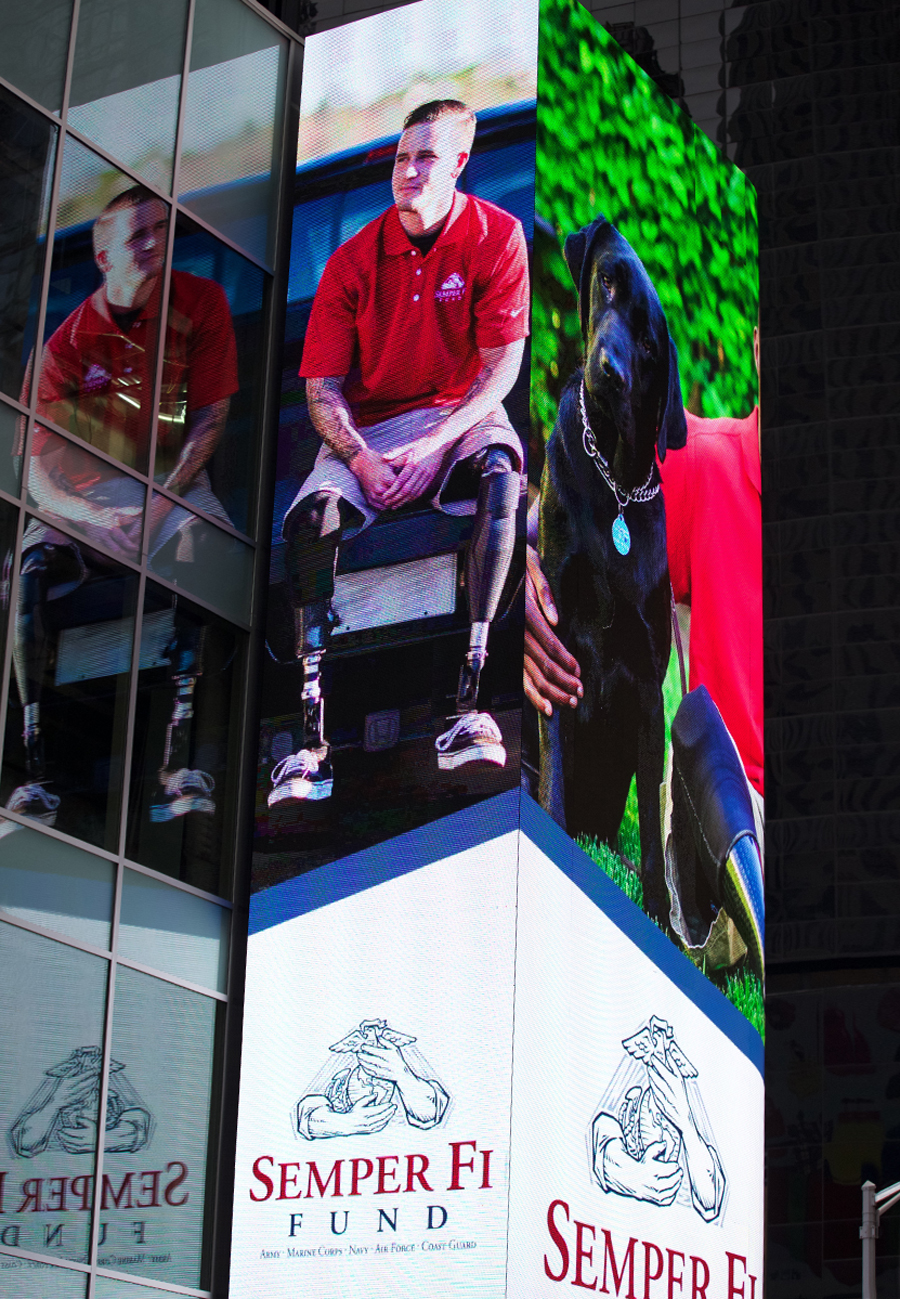 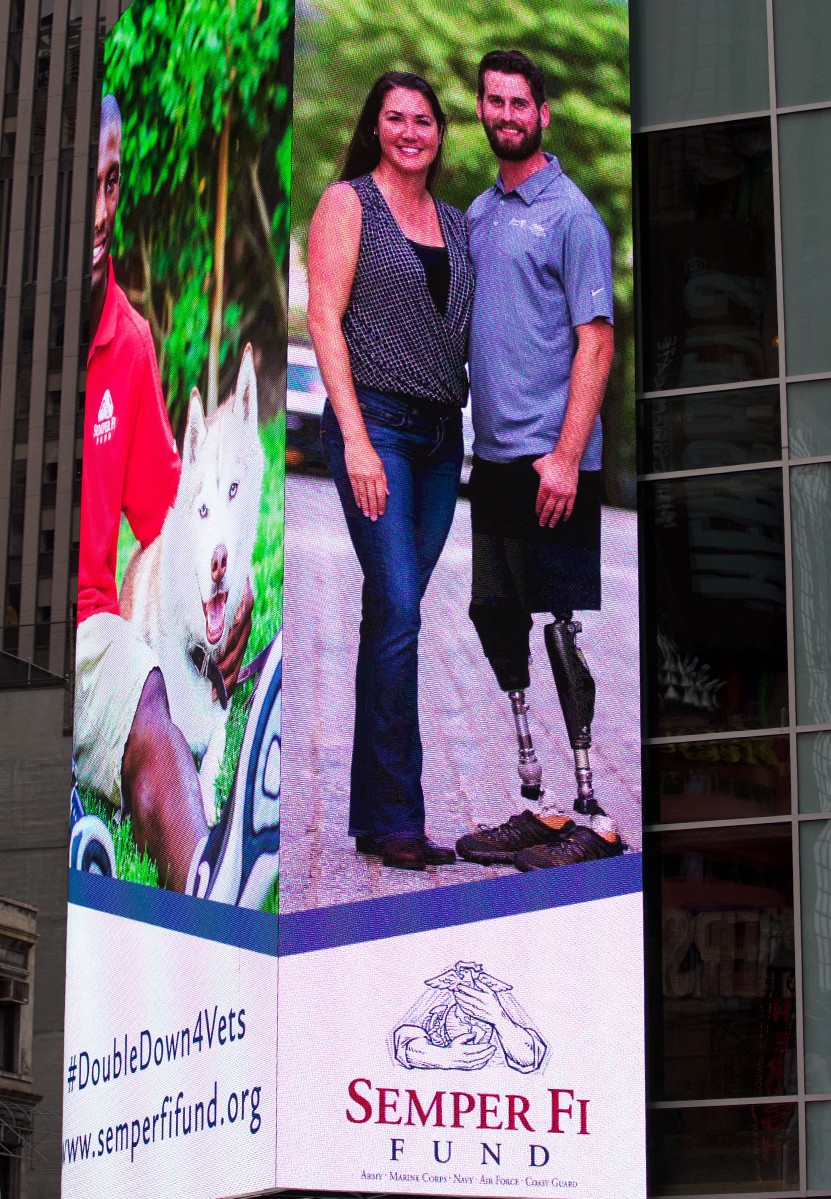 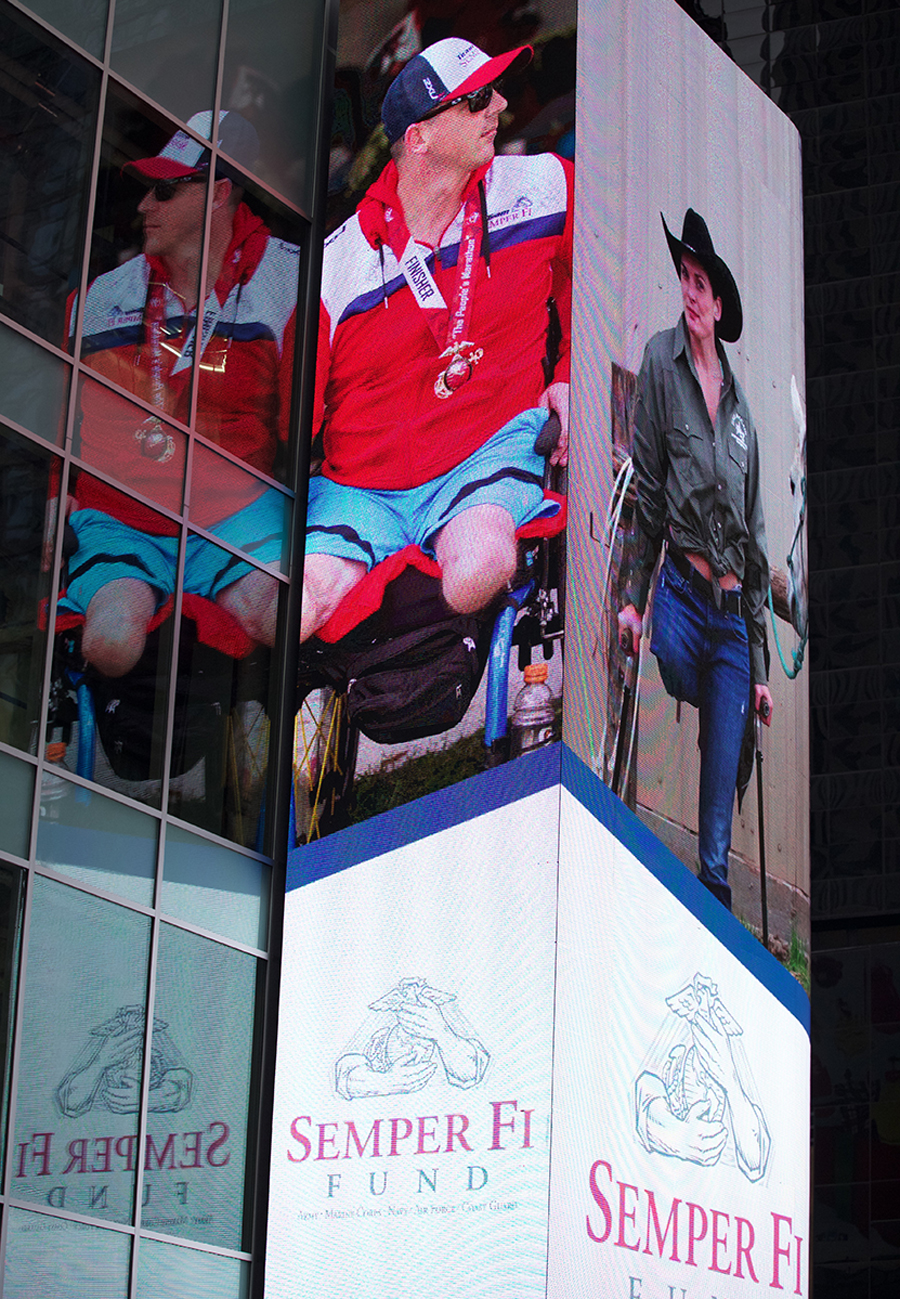 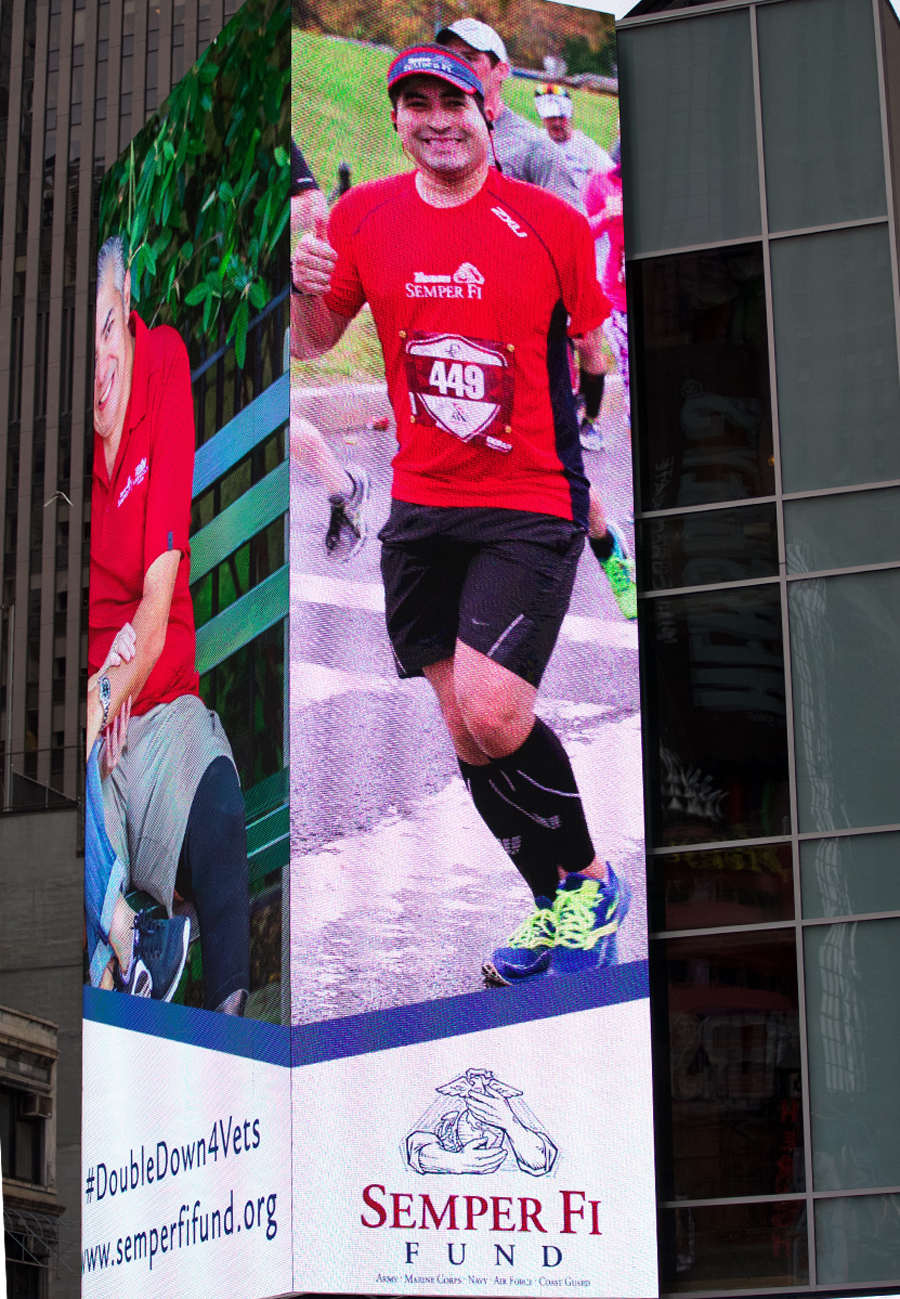 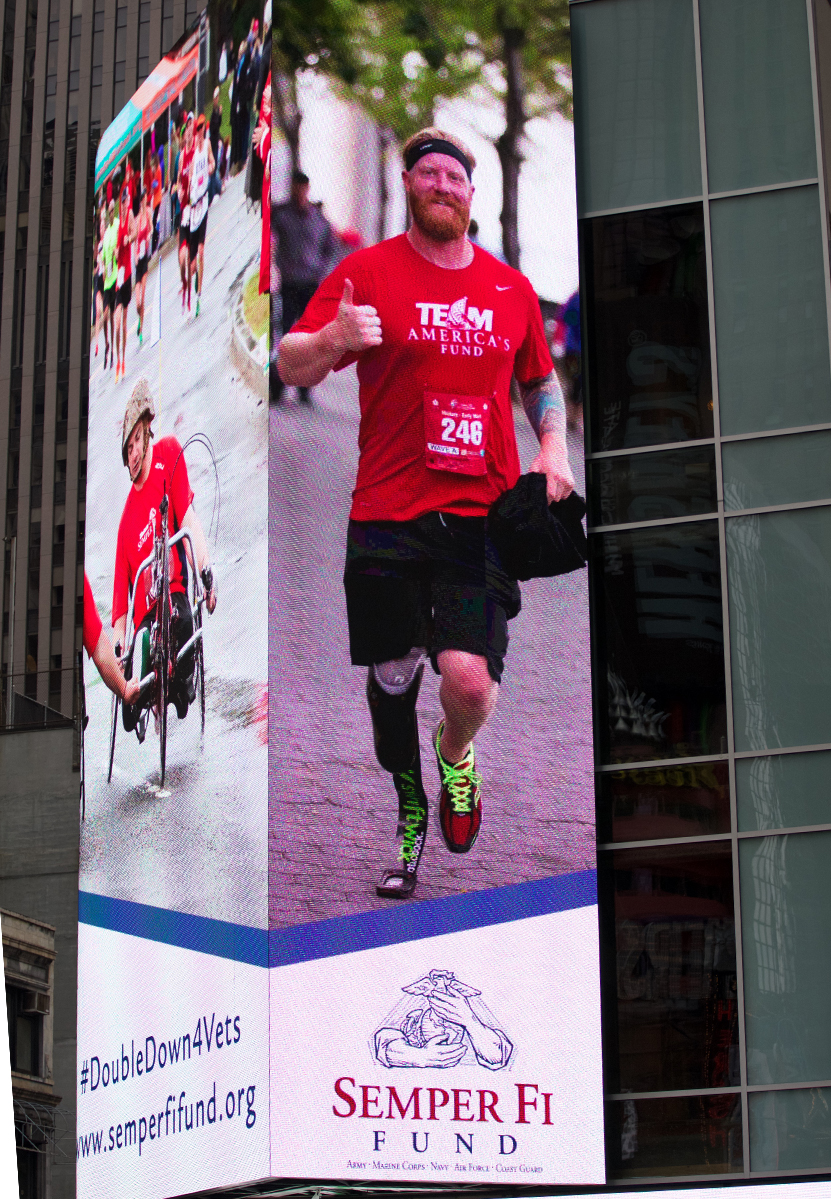 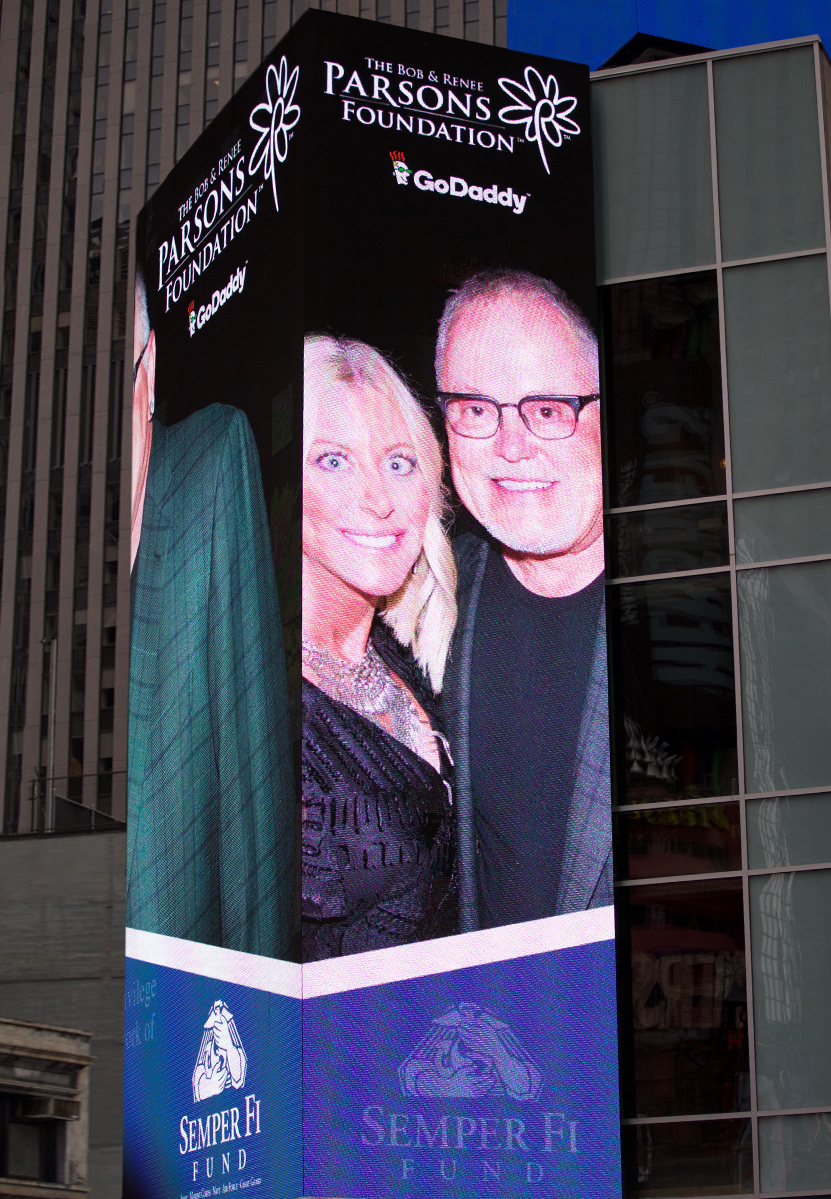 Looking to maximize your presence in a crowded space? Let’s tuck away the soapbox and megaphone and leave everyone with a lasting impression.

Flyer My Inbox (Email Me)

Maiocco Design Co. uses cookies. No, it's not like Oreos, Chips Ahoy or Famous Amos cookies. We wish, but instead, we have a lame non-edible tech rendition (thanks Europe...). Learn more about HTTP cookies.